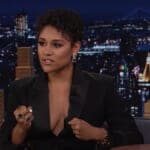 In the aftermath of the Supreme Court’s decision to overturn Roe v. Wade, comedian Chelsea Handler is suggesting a new amendment to the constitution that will “end male suffrage.” While guest hosting ABC’s “Jimmy Kimmel Live!” on Thursday, Handler joked that 1919’s 19th amendment, which gave women the right to vote in the United States, was only half the battle. One century later, and there’s one more step she wants to see taken: a 28th amendment that would remove men’s right to vote.

“Voting is a huge responsibility, and over the years, most men have demonstrated time and time again that they lack the judgment necessary to not f— that up—so let’s turn things over to the ladies,” Handler said. “If we endorse the 28th Amendment, maybe we can get America back to not sucking so hard.”

Last week, the Supreme Court overturned the nearly 50-year-old precedent that established a woman’s right to abortion. The legality of the procedure now falls to each individual state, with seven states banning nearly all abortions in the wake of the decision, and many more are expected to follow in the coming weeks. It’s why Handler is putting out a call to action.

“Guys, if you don’t want us going after your rights, then you better get up off your hairy asses and join the fight to defend ours,” she said. Outlining the many ways men can help women during this time of need, Handler began by emphasizing a pretty straightforward proposal: “not creating laws that kill women.”

She continued: “You should stop voting for people who wouldn’t protect your wife, sister, mother, aunt or grandmother’s right to choose what comes out of her pee-kachu. Talk to your sons. Tell them why this is so important before they get radicalized by Joe Rogan.” 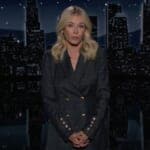 Handler additionally called for men to begin writing letters to their Congresspeople because “you’re a man, so they might actually listen to you.”

Watch the full video of Handler’s final monologue of the week above.