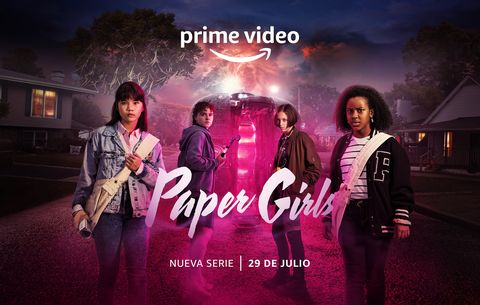 Adaptation of the comics written by Brian K. Vaughan and drawn by Cliff Chiang (both executive producers of the series), ‘Paper Girls’ follows four young girls who get caught up in a war between time travelers just as they were delivering newspapers on November 1, 1988. The four will embark on an adventure through time, getting to know their adult selves, as well as having to choose between accepting their future or turning their backs on the destiny that the universe has prepared for them.

this is how it looks The first official trailer for ‘Paper Girls’:

“Saving the world means getting along first”he said teaser with which Amazon Prime Video offered the first preview of the series. in him we met to the protagonists, with a small message about their personalities and each one assigned to a color. Under the blue light is Tiffany Quilkin, the only daughter of a wealthy and successful family and in whom we perceive a strong and decisive personality. Under the pink light is Mac Coyle, a working-class Catholic girl who became the first girl to deliver newspapers in her town and who hints at some envy of other girls her age. Under the yellow light we find KJ Brandman, who comes from the richest family in town and seems to question himself too much. Finally, under the turquoise light, there is Erin Tieng, a girl with Chinese roots who shows her internal conflicts for being different from the others.

The setting of the 80s and its mix of teen drama and science fiction adventures will delight fans of ‘Stranger Things’, with which it bears many similarities. Could this adaptation replicate its success? For now, the success of the comics will be a good incentive for viewers, who expect a series version to match. The comics began publication in 2015, running for a total of 30 issues until the end of its publishing run in 2019. Three years later, the story becomes a series with Amazon Studios and Legendary Television, in association with Plan B.

In addition to the protagonists, Two other signings have been confirmed in the cast: Ali Wong, who plays the adult version of Erin, and Nate Corddry, who plays a recluse named Larry who the girls meet along their journey.