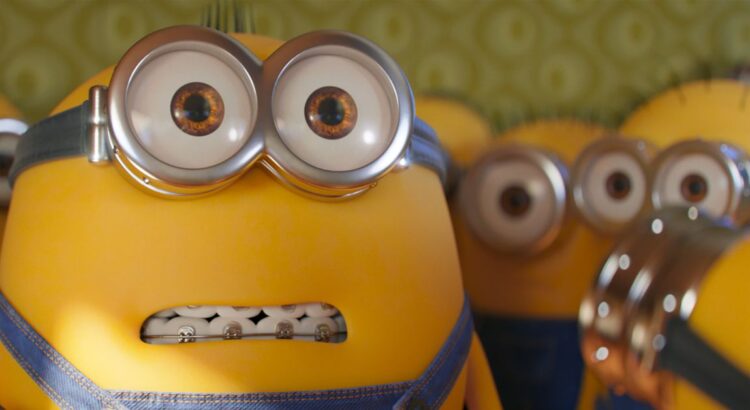 If you were within spitting distance of a movie theater this weekend, or just scrolling through TikTok, you might have noticed a new Minion-related trend: young adults and teens dressing up in formalwear to watch Minions: The Rise of Gru in theaters. The trend soared to ridiculous heights, with individual videos garnering as many as 24 million views and the “#gentleminions” tag on TikTok exceeding 24 million views as well. The “GentleMinions” trend is fueled by a commitment to shitposting that blends a chaotic love of Minion memes, nostalgia, and the good ol’ moviegoing experience.

Minions: The Rise of Gru is a prequel to the Despicable Me movie franchise that features the bumbling yellow bean-like characters. The trend took off July 1, during the opening weekend of The Rise of Gru. The videos vary, but most of them involve groups of friends donning formal attire, flooding the theater, and chanting “I count money! I count money!” as the songRich Minion” by Yeat plays.

Ryan Broderick, the writer behind the internet culture newsletter Garbage Day, traced the origins of the joke to the 2019 “Tickets to Joker” meme. The meme, Broderick explains, originated on 4chan with the phrase “two tickets to jokerpor favor” and made fun how a stereotypical incel would dress. But in the following years, Redditors and TikTokers reshaped the meme to say that watching certain movies is a chad-like characteristic instead. Most recently, TikTokers once again riffed on it, and it developed into an idea to go see the new Minions movie in a suit.

The vast majority of the video star groups of moviegoers in suits, who appear to be teens. Many involve just dressing up to go to the theater, but others put their own twist on the trend. One video showed a group of people sneaking in an entire garbage bin full of bananas, the favorite food of Minions. Even the super popular YouTuber Mr Beast got in on the trend and rented out an entire movie theater for himself and a group of people dressed up in suits.

While many of the videos seemed to be harmless shitposts, there was an instance where a group got so rowdy that the police were called to the theater. And some theaters in the United Kingdom have responded by banning “unaccompanied children wearing suits” desde Rise of Gru showings. It is a family movie, so parents and their children might have not known what they were getting themselves into by just going to the movie — not to mention the workers impacted by moviegoers’ rowdiness.

When I attended a showing at my own local theater in Minneapolis, I saw a group of people dressed up, and I stopped to ask them a few questions about why they participated in the trend. Norvil Rogers, who wore a flashy yellow button-up shirt, told Polygon, “We just thought that, with [Rise of Gru] being such a masterpiece, we would have to have to wear the appropriate attire [laughs].” His friend of him, William White, told Polygon that they got the idea to dress up after seeing it on TikTok and Instagram. For White, dressing up was “worth it” and “made the experience a lot better.”

As we chatted beside a giant cardboard cutout with a crowd full of dozens of Minions dressed up as sports fans, I asked if they were longtime fans or if they came for the bit. “I am definitely a fan. I have, like, a little plushie,” White said, while Rogers interjected: “Film connoisseur.” At one point, a third friend entered the conversation and mentioned that Rogers had made a funny meme, but the young men declined to share their art with Polygon.

The movie was a smash hit at the box office, earning roughly $125.1 million in its opening weekend. Minions have had a shocking degree of cultural staying power over the past decade. Conversations about why the movie performed so well in the box office can get muddled down, as a confluence of factors like nostalgia and character recognition, corporate marketing, the TikTok trend, and broad age appeal all came together to make the movie a success.

It’s hard to say just how much the GentleMinions trend contributed to the film’s massive opening weekend. But memes can have incredible power and influence on real life. Morbius, which was a flop, was brought back to theaters simply because so many people were shitposting about it. and when Demon Slayer: Kimetsu no Yaiba – The Movie: Mugen Train hit theaters, fans shouted “Eren Yeager” (from Attack on Titan) while watching the movie. Shitposting is officially a part of the moviegoing experience.

The GentleMinions trend not only brought visibility to the Rise of Gru, but also set a collective vibe for many people attending the film. The mood was chaotic and fun when I entered the theater and watched, giggling, as a group of suit-clad moviegoers lined up for tickets and settled into the theater’s plush velvet seating. It brought the joy of other rituals in life — gathering, dressing up, and making an occasion of something — to a silly movie about these yellow guys that like bananas.