How to Watch ‘Paws of Fury: The Legend of Hank’: Is the Animated Movie Streaming or in Theaters? 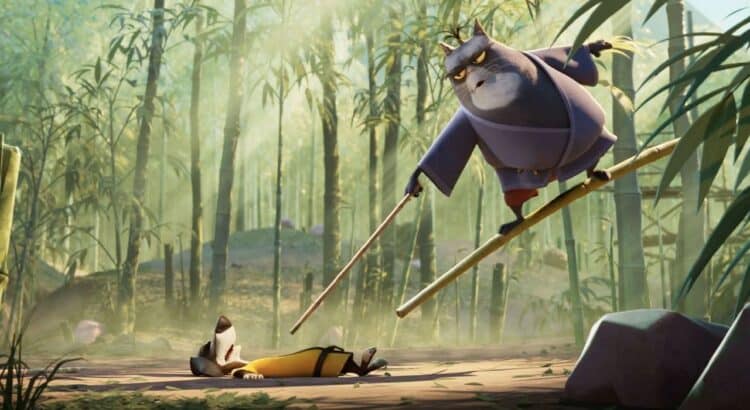 Paws of Fury: The Legend of Hank is the next best martial arts comedy movie you’ll ever see, or at least that’s what we are hoping for. The animated comedy film follows the story of a down-on-his-luck dog who wants to become a samurai to protect himself from bullies. But as it turns out, he’ll have to save an entire village of cats from a villainous feline first. Yes, it does sound a little uncharacteristic of dogs to become protectors of cats, but as they say, these are times of great change. So, get ready for an action-packed adventure with paws, claws, and everything in between.

Directed by Rob Minkoff, Mark Koetsierand Chris Baileythe action-animation comedy movie is inspired by the Mel Brooks (he also voices a character in this animation comedy) movie Blazing Saddles released in 1974. As for the cast, Paws of Fury: The Legend of Hank sees an ensemble of the who’s who of Hollywood playing various voice roles. As the movie makes its premiere, here’s a holistic guide on how you can watch Paws of Fury: The Legend of Hankand when and where you can watch the new animation action-comedy movie.

Is Paws of Fury: The Legend of Hank Streaming Online?

There is no official news if Paws of Fury: The Legend of Hank is streaming anywhere online at the moment. So, it’s safe to assume that the animation movie is only available in the theaters. However, since the movie is distributed by Paramount Pictures in the United States, it might become available for streaming on Paramount Plus. But that won’t happen for another three to four months from the release. You can watch this space for the latest update on streaming information of Paws of Fury: The Legend of Hank. But, for now, if you want to enjoy this feline-canine entertainment, then your only option is to visit your local theater and catch the animals raising their paws.

Is Paws of Fury: The Legend of Hank in Movie Theaters

Paws of Fury: The Legend of Hank has undergone a million backs and forths in its release date. It was originally supposed to release in 2017 and was moved to 2021. In January 2022, when Paramount Pictures acquired the distribution rights, the movie was scheduled for release on July 22, 2022. Finally, it has been moved up to Friday, July 15 , 2022, for release in theaters across the United States. When visiting the theaters, it’s advisable to continue to follow health safety guidelines on Covid-19, as recommended by your city/state, and observe precautions as necessary.

There are two trailers out so far for Paws of Fury: The Legend of Hank and both the trailers show how ridiculously funny this movie is going to be. The longer clip gets into more details about the plot and gives a quick look at the major characters like Jimbo (Samuel L Jackson), Ika Chu (Ricky Gervais), Sumo (Djimon Hounsou), ogha (George Takei), Shogun (Mel Brooks) and of course, Hank (Michael Cera). the shorter trailer, on the other hand, highlights some clips from the first trailer. Basically, the second trailer is more pun-oriented, with references from major pop culture elements, including things like Twitter, training montages of Hank (just like any martial arts movie about an underdog), and similar things from other popular movies. But the best part of the second trailer is the starwars reference, where in a battle scene between Ika Chu and Hank, Ika Chu says “Hank, I am your father”. It’s certain to crack you up.

When Will Paws of Fury: The Legend of Hank Arrive on Digital or DVD/VOD?

So far, there’s no news/updates about the VOD release of Paws of Fury: The Legend of Hank, or whether there’ll be any digital release at all. Mostly, the physical media of theatrically released movies come out three or four months after the premiere (sometimes later than that). It is possible that the DVDs and VOD release for Paws of Fury: The Legend of Hank might also be out around that time, like sometime in the fall of 2022. So, in case you don’t get a chance to catch the cats and dogs in action right now, you can always wait for the DVD/Blu-rays and add this to your holiday watchlist. But if you ask, watching this hilarious comedy of cats would probably be more fun on the big screen.

What Is Paws of Fury: The Legend of Hank About?

What is this movie about indeed? Is this a movie about an underdog becoming a hero? Or is this about how dogs and cats can finally be on the same side? Or maybe it’s about the hidden powers of cats and this movie is a comical take on what’ll happen if these fuzzy little creatures we love to pet and be friends with finally become like us. Who knows? Coming back to the story of Paws of Fury: The Legend of Hank, well, it is about Hank, a hapless little beagle who just wants to be strong and powerful enough to fight off bullies. So, the poor kid goes searching for a samurai master, Jimbo. But looks like Jimbo has a hidden agenda in training Hank.

Not only Jimbo, but the rest of the cats in the village look at Hank as an opportunity to fight their arch enemy, Ika Chu – viz-rattler Somali cat. Ika Chu just wants to take over and rule the village, like any villain. When Jimbo meets Hank, he thinks the desperate dog can be that savior the cats need, or in other words, he has found his patsy from him. And thus he begins the adventures of Hank, a new legend in the making. From wanting to become a samurai to becoming the protector of cats – one thing that dogs despise from the bottom of their hearts – it’s going to be a very ironic journey for Hank. Now, whether Hank can finally save the cats or not, is what you have to watch the movie for. Can Hank become the next iconic animated martial arts hero? Let’s hope so!

admin
See also  Tatiana Maslany, delighted with the debate on the end of 'She-Hulk'