‘Resident Evil’: the explained end of the Netflix series 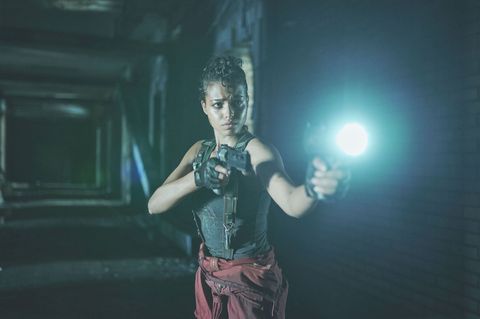 Netflix has had us in suspense with ‘Resident Evil’, the live action series created by Andrew Dabb. Although the franchise was once remembered for the movies starring Milla Jovovich, which launched Capcom’s video games to stardom, the year 2022 has left us with two recent entries to the Receiver thanks to the lackluster Resident Evil: Welcome to Raccoon City movie and the eight-episode Netflix series, which are unrelated.

Dabb’s series is a faithful adaptation of the source material, a continuation of the video games that take place after ‘Resident Evil Village’; sadly, there is no cameo from the famous Lady Dimitrescu. In the series, things came to a head in the (literally) explosive finale, with clones, crocodiles, and deaths galore. What is it that you missed? Here’s the ‘Resident Evil’ ending explained and how it sets up season two.

Dividing history between 2022 and 2036, the focus of the finale was once again on sisters Billie and Jade Wesker in its adolescent and adult versions. In 2022, Simon Marcus assists Jade as they raid the Umbrella Company headquarters in New Raccoon City in an attempt to rescue Billie.

Here we also find Albert Wesker and his clone, Bert. fans wondered How Wesker Survived His Iconic Death In A Volcano In ‘Resident Evil 5,’ But It Turns Out Before The Original Wesker Died, He Gave Up Three Clones in the Arklay Mountains. The Wesker we follow in the series is a strangely likeable clone, Bert is a bit unhinged, and Alby was killed in 2005.

When Billie is bitten by a zombie dog and the T-virus begins to spread through her body, accidentally bites Simon in a fit of rage, infecting him too. Brilliant villain Evelyn Marcus arrives on the scene and realizes her son has been infected, so she shoots him in the head to save him from the horrors of becoming a “Zero.”

The survivors decide to destroy Umbrella’s work and there is a heartfelt exchange between Albert and Bert. Al says that Bert deserves to live the life he never had and chooses to stay to blow up the lab. Before sacrificing Albert gives the girls a piece of paper and tells them to find “her”. The big reveal comes at the very end, when Jade opens it to find Ada Wong’s name.

Those who are up to date with video games will know who he is. Ada Wong, an antagonist in the story who works for a branch of Umbrella called “The Organization”was last seen during the events of ‘Resident Evil 6′, where she destroyed Dr. Carla Radames’ lab and accepted a mysterious job.

Initially, Ada was supposed to help Ethan Winters in ‘Village,’ but the idea was scrapped by the creators. According to the Netflix series, Ada is currently in Japanso it should give us a hint as to where Bert, Billie, and Jade are headed next.

Also in 2022, we see an injured Evelyn being carried out of the destroyed lab. Given that in 2036 we see her only as a puppet controlled by Billie, it was not a surprise for her that she came out of it alive. We’re not sure what’s going on with Evelyn in 2036, because, barring some cosmetic surgery, she doesn’t seem to have aged in the slightest in 14 years.. It is also unclear if she survives in the future timeline. When Jade releases a pheromone to lure a horde of ‘Zeros’ into Umbrella’s makeshift camp, we don’t see if Evelyn makes it out.

Billie solemnly warns that many people are going to die and says “maybe you” to Evelyn before leaving. Still, something tells us that Paola Núñez will return. More lives are left hanging in the balance in 2036 when Jade is unable to shoot Billie.. Her sister is a little less forgiving, and when Billie shoots Jade, leaving her for dead, the head of Umbrella also flies off with her daughter Bea.

Jade bleeds to death as Billie escapes, but we’re betting a mother’s love and her search for Bea will be a driving force in season two. speaking of which, it is implied that there is something special about Bea.

When the University released a giant mind-controlled zombie, it seemed that Bea was lost. Instead, the creature lay down next to her and tried to protect her before Umbrella tore it to pieces. Has Jade been experimenting on her own daughter or does Bea have the same properties as Billie?

We know that Jade has “bad” blood, but if Bea has the same ability to bond with the virus as her aunt, it would explain why Billie kidnapped her. Finally, we wonder how the world will go to shit between 2022 and 2036. Simon can’t infect anyone because he’s dead, and with Umbrella’s lab destroyed, we should be able to prevent another Raccoon City incident. Although Billie may be biting everyone in Japan, there is some teasing of what was in Evelyn’s tank.

The 2022 timeline ends with the creature’s hand sticking out of the rubble, meaning it will likely cause problems in season two. There are many theories as to what this thing is, with possibilities ranging from a Tyrant variant to the reanimated corpse of James Marcus. Umbrella’s co-founder was mentioned by both Wesker and Evelyn, so he could have been trying to resurrect his beloved dad.

All in all, Dabb built on the already established ‘Resident Evil’ lore, while also taking things further. Along with a cameo from the original Wesker, we also got Lisa Trevor as Golgotha.. Dabb already said in Deciding that other iconic characters could appear later, and the showrunner he apparently has an actor in mind for Lady Dimitrescu.

Ada’s reveal is a transition to at least a mention of Leon S Kennedy, while others like Chris and Claire Redfield could be poised to arrive with Jill Valentine. However, for the time being,Resident Evil’ has been resurrected while we await news of a possible second season.

Tom Chapman
Tom Chapman is a freelance writer specializing in movies and TV.

admin
See also  Neither actor nor actress: Why the awards should be genderless (or, perhaps, not yet)