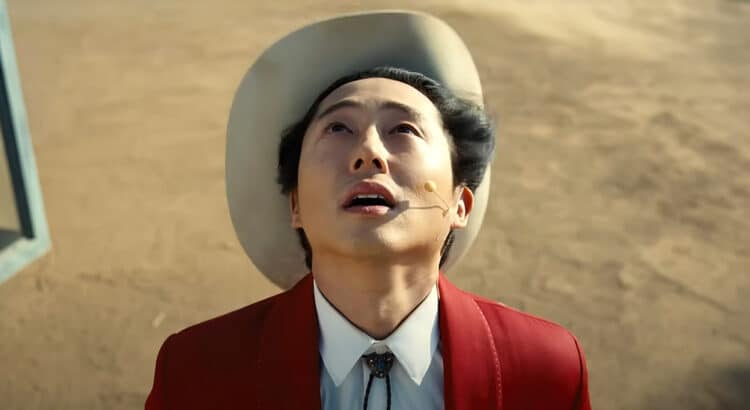 The first reactions to Jordan Peele’s “Nope” are pouring in as the movie continues its premiere in Los Angeles, earning praises for the director’s turn to science-fiction and drawing comparison to filmmakers like Steven Spielberg.

Expectations are high for “Nope,” given Peele’s emergence as one of the most beloved directors over the last five years. His debut film, “Get Out,” earned four Oscar nominations, including best picture, director for Peele and actor for Kaluuya. Peele won the Academy Award for original screenplay. The film’s $255 million worldwide gross was matched by Peele’s follow-up, “Us,” which was praised by critics and sent fans into spirals of theories and explainers.

Even though he’s built a brand for himself with only two films, Peele assured that he went into “Nope” relatively unfettered by audiences’ expectations of him.

“We tried to make a big summer blockbuster that you can enjoy whatever you want,” Peele told Variety’s Angelique Jackson at the film’s premiere. “You want to go in and just smoke a big blunt and talk with a friend about societal issues, you can do that. If you want to come and just relax and get away from it all and see Keke Palmer in the midst of a UFO, then that’s what we got for you.”

“Nope” reunites Peele with his “Get Out” star Daniel Kaluuya in the story of two siblings (Kaluuya and Keke Palmer) who discover an alien spaceship hovering over their family’s horse ranch. The duo sets out to capture the spaceship on camera, but the mission doesn’t go according to plan.

“Nope” begins screening for critics in most major markets Tuesday, but the film has already been seen in preview events by some members of the press.

Collider editor-in-chief Steven Weintraub kept his praise light on the details, but assured his opinion is a “big thumbs up.”

Not going to spoil any aspect of @JordanPeele‘s #NopeMovie except to say *big* thumbs up.

CNN entertainment business reporter Frank Pallotta called the film “out of this world,” peppering his praise with references to Alfred Hitchcock, John Carpenter and Adam McKay.

NOPE is out of this world. A monster mash with great performances (esp. Kaluuya) and a 50s sci-fi invasion motif. A spectacle about the horrors of spectacles.

Jordan Peele has been compared to Hitchcock, but NOPE shows he’s a next-gen Carpenter. Enjoy the show and don’t look up. pic.twitter.com/dGKwbXg0WF

#NopeMovie is a resounding YES. See it on the biggest screen you can find. A thrilling and strange spectacle unlike anything else out there. I’ll never look at the sky the same way again.

SW #NopeMovie is absolutely phenomenal in so many ways. Perfectly blends together a sci-fi spectacle w/a story that is also something of a Hollywood reckoning & it blew my expectations away. Gorgeously shot, the sound mix is ​​thunderous & the cast all shines. Love love loved it. pic.twitter.com/qdcZIvsX5T

Huffington Post senior cultural reporter Candice Frederick is still brewing on the film. Ella it seems to have given her lots to chew on.

Not sure how y’all can come up with such a quick reaction to #NopeMovie. I’m still in my head about it.

Hollywood Critics Association member praised the ambition of “Nope,” with the caveat that he believes the film marks Peele’s weakest effort so far.

Nope is Jordan Peele’s most ambitious film but also his weakest. The first act is superb but by the second, it loses its footing and becomes a bad M. Night Shyamalan movie with Spielbergian elements. It lacks a sense of focus with a story that is never fully realized. #NopeMovie

#NOPEMovie isn’t what you expect and the trailer doesn’t give it justice.

Jordan Peele does the unimaginable — again.

RUN, DON’T WALK TO SEE IT THIS WEEKEND.

GIVE KEKE PALMER ALL THE AWARDS CONSIDERATION THIS YEAR.

The most important thing you need to know about NOPE is it’s crazy different from Get Out & Us. This is Jordan Peele spreading his wings and making big budget Spielberg/esque sci-fi, but with the subtext you’d expect. Enter with an open mind and you’ll be rewarded. #NopeMovie

#NopeMovie is an absolute blast!! @JordanPeele has crafted a loving homage to fans of a certain Spielberg masterpiece – I’ll let you figure that out. The cast is excellent and the sound and set designs are impeccable! full review @joblocom very soon! This is a wild ride!

Jordan Peele’s #nope is one of the best films I’ve watched this year! It’s frightening & ferocious, but also very funny & unlike any UFO movie you’ve ever seen. It is a wholly unique & VERY entertaining horror epic full of wild surprises & an unforgettable Keke Palmer performance pic.twitter.com/iua9HPt0RG

Jordan Peele’s Nope is his most confident, unfettered, and potentially most divisive vision yet. Swapping the exclamation marks of horror for the question marks of sci-fi, this is less about scares. With hints of Close Encounters, Jaws, and more, #NopeMovie is a real puzzle box. pic.twitter.com/Ny3EVaLTqW

#NopeMovie is otherworldly yet indescribable. From instances of sheer terror to heartfelt moments btwn the characters, #nope is an experience that won’t be easy to shake off as you find yourself picking your jaw up from the floor. Jordan Peele has done it again! @nopemovie pic.twitter.com/bUr1ad5TAx