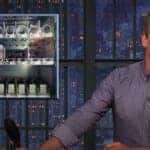 Seth Meyers was a bit baffled on Wednesday night, as he tried to piece together why the Justice Department is reportedly only just now considering criminal charges against Donald Trump more seriously because of the Jan. 6 hearings.

“At this point, the Jan. 6 committee hearings have provided us with ample evidence that Trump and his gang of oddly shaped goons committed multiple crimes,” Meyers prefaced. “I mean, that seemed obvious on the day the insurrection happened, but now we have a lot more detail.”

Meyers then pulled up a clip from a recent MSNBC segment, in which the anchor reported that the bombshells of Cassidy Hutchinson’s testimony were “so profound that it jolted top Justice Department officials into discussing the topic of Mr. Trump more directly, at times in the presence of Attorney General Merrick Garland.”

And at that, Meyers was just confused, calling out Garland and his team directly.

“OK, I mean, I get that Cassidy Hutchinson’s testimony was shocking, but you’re just now getting around to discussing Trump?” I have mocked. “You’re six years late. Did you also just start watching ‘Fleabag?’” 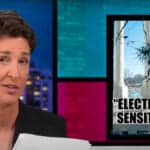 Meyers then poked fun at the fact that reports indicate Trump is planning on running for president again in 2024, in part so he can pardon himself and avoid those possible criminal charges. Because really, the host doesn’t see much of a chance of those charges meaning anything.

“It’s pretty amazing that when Trump ran in 2016, his slogan was, ‘Lock her up,’ and in 2024 it’s gonna be, ‘Vote for me or I’m gonna go to jail,’” he joked. “I, for one, don’t think Trump needs another get-out-of-jail-free card. His whole life has been a get-out-of-jail-free card. I’m pretty sure Trump could park his golf cart in the middle of the BQE during rush hour, and the cops would just set up orange cones around it.”

You can watch Meyers’ full “A Closer Look” segment in the video above. 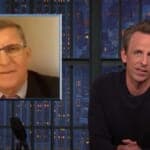