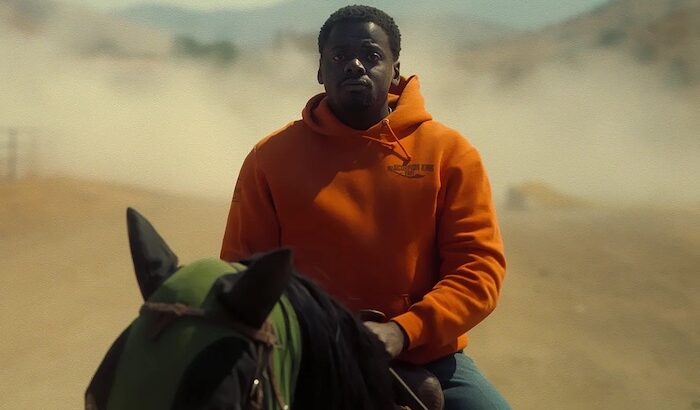 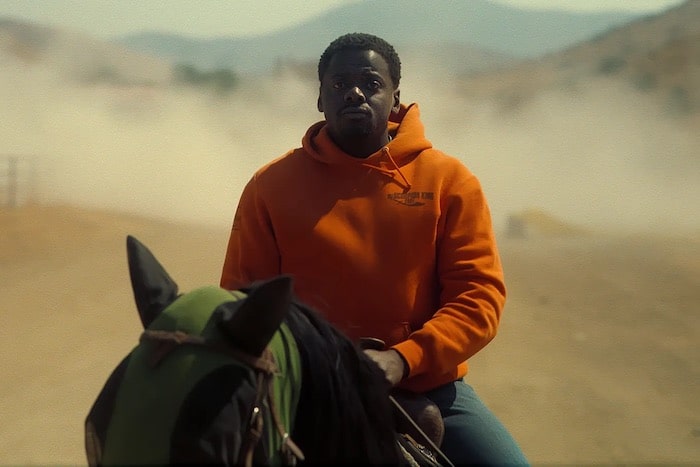 “I will cast abominable filth upon you, make you vile, and make you a spectacle.” These are the words, Nahum 3:6, that writer-director Jordan Peele uses to set the stage for nopehis third feature film since he came onto the scene with an almighty bang in 2017 with the paradigm-shifting get-out.

nope centers the Haywood siblings Otis, Jr. “OJ” (Daniel Kaluuya) and Emerald (Keke Palmer), who find themselves left suddenly in charge of the family horse-training business, Haywood Hollywood Horses, after the sudden death of their father, Otis , Sr. (the one and only Keith David), in a freak accident-a nickel through the eye in a hailstorm of metal debris. The official story is that it was wreckage from a stunt plane, but neither sibling finds this answer satisfactory—especially considering the strange happenings they keep noticing around the family ranch: odd clouds, spooked horses, power outages that sap even battery-powered devices of all charge instantly. Meanwhile, as the Haywoods try to get to the bottom of the mystery, their neighbor, child-star-turned-theme-park-owner Ricky “Jupe” Park (Steven Yeun), has designs on expanding into their ranch.

nope feels at once in step with what we’ve seen of Peele as a director thus far and also intriguingly different. Like many of the most commercially accessible auteurs of the screen, one of Peele’s keenest talents is his knack for familiar-with-a-twist; for mixing and matching a smorgasbord of references without feeling derivative. nope easily represents the most ambitious and eclectic mix of influences yet for Peele. In addition to both horror and sci-fi (specifically, of the alien invasion variety), there’s a healthy dose of Western influence and a throughline of silent film callbacks. The most prominent references include early-aughts blockbusters, Eadweard Muybridge’s 1878 “Sallie Gardner at a Gallop,” and a 1950s hit novelty song that rather boldly gets an entire scene dedicated to it.

Three projects in, certain hallmarks of Peele’s style are certainly coming into focus—his specific use of music (minimal scoring but a deep love of a great needle drop), the particular way all of his films thus far open with an incident of trauma and then build a narrative around it, his unexpected but not unwelcome fondness for the Old Testament flavor of fire and brimstone and Bible verses they definitely skipped over in Sunday school.

Perhaps more interesting, though, is the way Peele’s subsequent works, and nope especially, they have moved away from his game-changing debut. One of the most successful films of the past decade by every conceivable metric—critical acclaim, rate of return, you name it—get-out was the sort of runaway hit that not only made it an instant classic and cultural touchstone but has also fundamentally shaped the industry around it. Horror as a vehicle for socio-political commentary, scares with a hearty helping of laughter—get-out certainly didn’t invent either of these things, but it pushed them to the fore.

See also  A Quiet Place 2 has changed its release date again, but it's actually good news

In many regards, the current horror film landscape is one constructed in get-out‘s shadow. This is why it’s so intriguing, and honestly rather exciting, to see how Peele is still clearly most interested in changing the game, even when he’s the one who established the paradigm. Because while his first feature of him brought pointed social commentary in horror to the fore, Us and now nope in turn have both marked giant steps in precisely the opposite direction.

This is not to say that nope it is irrelevant. It is to say that it makes a point of leaving room for interpretation—going so far at times as to leave far too much room, making the characters and their actions feel distant, even opaque.

While Daniel Kaluuya is the caliber of actor who can steal a feature from a supporting role, nope instead finds him on occasion fading into the background in spite of being the lead. Themes of family and duty and legacy swirl about OJ without ever fully coming into focus. There are places where one almost feels that perhaps Kaluuya himself might be struggling to connect with the character, where the intensity and presence that so defines his most memorable roles to date is fully lacking. OJ is clearly grieving his father from him and feels the full weight of upholding the family legacy on his shoulders from him, yet that question at the heart of storytelling—motive—feels oddly difficult to answer. What does OJ actually want? His character of him is so taciturn, with the occasional wisecracking comment that only makes his character of him feel even more enigmatic, that even (hell, especially) by the end, it is difficult to say.

It is really Keke Palmer as Emerald who carries the film. Unfiltered and brash, there is a compelling edge of fragility, of boldness-as-facade, that is largely brought to the table through nuances of Palmer’s performance. In terms of screen time, nope might favor OJ, it’s Emerald’s energy that keeps the film alive.

Well, that being said, there is one other performance worth noting here, and that’s Brandon Perea as Angel, a techie working at a dying electronics store who invites himself along for the Haywoods’ wild ride because, well, he doesn’t have anything better to do. And he loves Ancient Aliens. Perea elevates a quippy sidekick role with off-the-scale levels of charisma in a way that has exciting echoes of Tom Hardy’s star-making turn as Eames in inception. At once comedic relief and voice of reason, Angel is the one truly pleasant surprise in a film that, while on the whole sufficiently compelling, has more than its fair share of rough edges and bumpy patches.

The epigraph itself ends with the word “spectacle,” and that very much seems what Peele attempts to create here. Indeed, those key set pieces are plenty remarkable. The issue is all the spaces in between. nope is, in a way, the most illuminating of Peele’s films to date because it truly does feel like being teleported right into the filmmaker’s brain, pure and unrefined, for better and for worse. Like a first draft that went straight to greenlight, nope is a half-cooked hodgepodge of exciting ideas pulled out of the oven far too soon.

In playing with so many different legacies within film history and pulling them together in different ways, Peele draws unlikely bedfellows together in a way that in some basic sense works, but in comparison to his first two films, nope gets uniquely tripped up by the issue of context.

Beyond horror or alien invasion sci-fi, there’s one particular cinematic legacy that ends up taking over the fundamental narrative-the “evidence of the film” film.

There are over a century of films about the world-changing power of film, and specifically film as irrefutable evidence. In 1913 there was literally a silent short entitled, “The Evidence of the Film”—and even before that there was the wonderfully zany “Cameraman’s Revenge,” a 1912 stop-motion revolving around a cheating beetle who gets caught by his wife because he angers a camera-wielding grasshopper with a knack for holding a grudge.

See also  Falcon & Winter Soldier: Zemo Dancing was not in the script

It’s a rich and storied lineage, but one of the most frustrating things that nope fails to do is to face a fundamental issue with its own premise: we don’t believe our eyes anymore. nope is separated from its many predecessors by taking place in a world where its underlying assumptions are no longer true on any level. And not in a way that requires extensive thought to uncover, but a way that is hard to ignore to the point of distraction, living in the world that we do where the unstoppable, impenetrable power of the wilfully ignorant to deny the blatantly obvious—that the planet is burning, that pandemics are real, that school shooting survivors aren’t “crisis actors”—is ubiquitous. This dissolution of fact, of the very notion of reality, is The Thing that defines where we are now. It is inescapable. Yet, nope takes the shape of a narrative that forces it into direct conflict with this reality and just fully ignores said reality. It feels naive and trifling, particularly coming from a creative voice who has spent so much of his career demonstrating such an incredibly perceptive wit.

At your best moments, nope is truly great. Peele has yet to make a film where that isn’t true. However, nope is not the kind of film that is always at its best—and feels like a dip in an unfortunately consistent downward curve three films into Peele’s directorial career. where get-out was a film where not a single frame felt taken for granted, and Us was a masterclass of tone with some dubious plot mechanics, nope is a film with filler scenes. With lulls and dead space and entirely pointless characters. (Barbara Ferreira’s handful of lines restricted to two throwaway scenes are so inconsequential it’s almost embarrassing to watch.)

All that said, the pros still outweigh the cons, and the appeal of Peele’s ideas far outshine the limits of the execution here. But if this trend continues, it feels inevitable that balance will shift unfavorably—and sooner rather than later. nope is good enough, for now, but that’s still plenty disappointing coming from a filmmaker who has demonstrated his capacity for greatness.

nope is now playing in theaters. 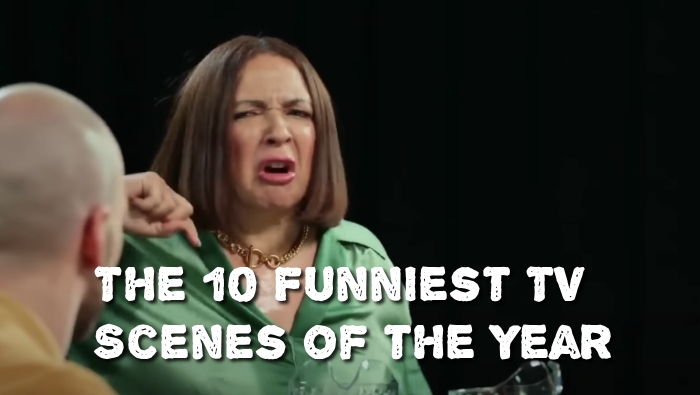