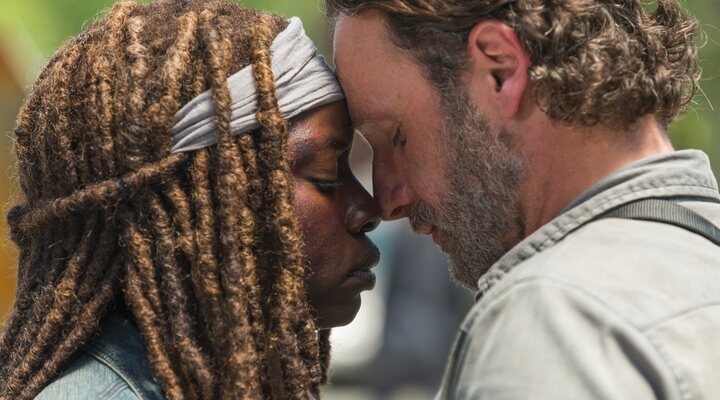 ‘The Walking Dead’ didn’t just go to San Diego Comic-Con to say goodbye to its fans and unveil the first preview of the last eight episodes of the series. They had a couple of surprises that nearly caused attendees at the show’s panel in Hall H at the convention to collapse. The screaming was deafening as Andrew Lincoln and Danai Gurira appeared on stage.. Rick Grimes and Michonne, together again.

Hand in hand, the actor and actress sat down at the Hall H table to unveil the status of the Rick Grimes-centric movies we’ve been waiting years for. Well, the state is…deceased. AMC has decided to cancel the movie (or trilogy of movies) that would show us what had become of Rick all this time away from the rest of the protagonists. Universal Pictures was going to handle distribution and Craig Zobel had been close to directing it.

Finally, the chain has decided to turn that film into a six-part miniseries to premiere next year, and Rick will be joined by Michonne, continuing their apocalyptic love story. The series is precisely described as “an epic love story between two characters changed by a changed world.” They intend to explore if these two characters can find their place in this war between the dead, and the living, and if all their past is not too heavy a slab to allow them to continue.

We haven’t seen Andrew Lincoln’s Sheriff since Season 9. The characters left him for dead. Michonne said goodbye to ‘The Walking Dead’ in season 10 because she decided to go looking for him, convinced that she could still be alive.

In addition to this new spin-off, ‘The Walking Dead’ announced that the last eight chapters of the mother series will begin broadcasting on FOX Spain on October 3, and that several projects continue to expand the franchise. Tales of The Walking Dead will premiere in September on AMC+. ‘Isle of the Dead’, spin-off centered on Maggie and Megan, will also be released next year. And in 2023 they also intend to launch the Daryl spin-off, which will be located in Europe. Next year we are going to get fed up with walkers.