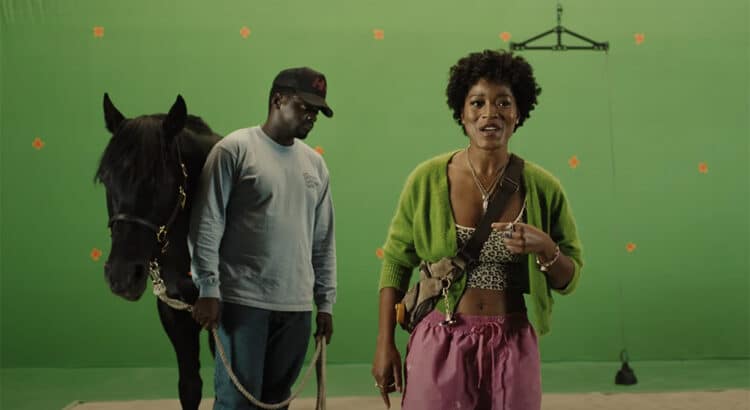 Audiences responded with a resounding “yep” to Jordan Peele’s science-fiction thriller “Nope,” which topped the box office with its $44 million debut.

Those ticket sales were slightly behind projections of $50 million and fall in between Peele’s first two films, 2017’s “Get Out” (which opened to $33 million) and 2019’s “Us” (which opened to $71 million). “Nope” may not have cemented a new box office record for Peele, but it marks a strong start for an original, R-rated horror film. In fact, it stands as the highest opening weekend tally for an original film since “Us” debuted more than three years ago. Yes, that includes Quentin Tarantino’s star-studded “Once Upon a Time in Hollywood,” which started with $41 million in July 2019.

“The opening isn’t as big as ‘Us,’ but it’s still extremely impressive,” says David A. Gross, who runs the movie consulting firm Franchise Entertainment Research.

It’s worth noting that Peele’s sophomore feature “Us,” a scary story about threatening doppelgängers, enjoyed an especially huge opening weekend because it followed the runaway success of the Oscar-winning “Get Out.” After his directorial debut he captured the zeitgeist by delivering scares while encouraging audiences to think, audiences were more than a little eager to watch Peele’s next mind-bending nightmare. Though Peele still has outsized good-will with audiences, box office expectations for “Nope,” another complex social thriller, were comparatively a little more Earth-bound.

“Nope” cost $68 million, which is significantly more than “Get Out” (with its slender $4.5 million budget) and “Us” (with its $20 million budget). So the movie will require a little more coinage than Peele’s past films to turn a profit. “Get Out” and “Us” were wildly successful in theaters, with each collecting $255 million at the global box office. “Nope” does not open at the international box office until mid-August.

See also  Marvel's Namor: Everything You Need To Know About The Submarine From The Comics

“Nope” reunites Peele with “Get Out” star Daniel Kaluuya — and adds Keke Palmer and Steven Yeun to the mix — in the story of siblings who live on a gulch in California and attempt to uncover a video evidence of a UFO. Critics were fond of “Nope,” which holds an 82% on Rotten Tomatoes. Audiences gave the film a “B” grade, the same CinemaScore as “Us.”

Since “Nope” was the only new movie to open this weekend, several holdover titles rounded out North American box office charts.

Another Universal movie, “Minions: The Rise of Gru” took third place with $17.7 million from 3,816 venues. After four weeks on the big screen, the animated family film has earned $297.8 million in North America and $640.2 million worldwide.

Sony’s literary adaptation “Where the Crawdads Sing” landed at No. 4 with $10.33 million from 3,650 locations. With its better-than-expected debut last weekend, the mystery-drama has amassed $38.3 million to date.

“Where the Crawdads Sing” beat “Top Gun: Maverick” by a hair. Paramount’s blockbuster sequel pulled in $10 million from 3,160 theaters in its ninth weekend of release, bringing its domestic tally to a massive $635 million. “Maverick” recently overtook “The Avengers” ($623.3 million) to become the ninth-highest grossing movie in domestic box office history. Since the “Top Gun” sequel has not made less than $10 million in a single weekend, industry experts believe the movie has enough juice to soon pass the No. 7 and 8 slots, which belong to “Titanic” with $659 million and “Jurassic World” with $653 million.