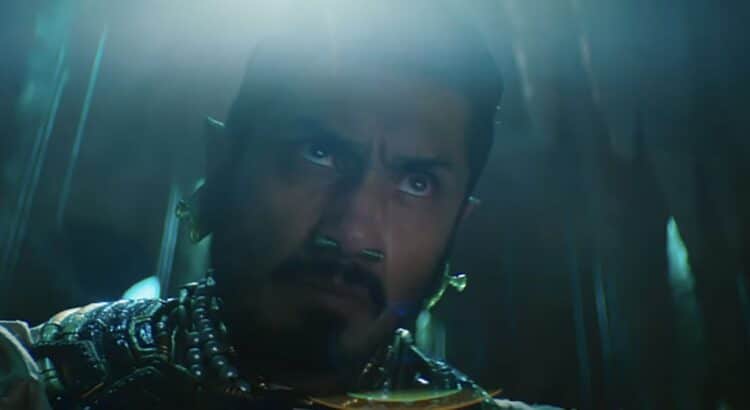 There were so many amazing announcements coming out of the Marvel Studios panel at San Diego Comic Con on Saturday night. This included the first trailer for Black Panther: Wakanda Forever. The footage for the highly anticipated sequel teased many compelling things. However, one key piece that will not be lost on any fan is that the trailer and synopsis for the film officially confirmed Tenoch Huerta(Narcos: Mexico) is playing classic Marvel character Namor the Sub-Mariner.

This is one of Marvel’s oldest characters dating all the way back to 1939. The anti-hero is very similar in power set and backstory to DC Comics’ Aquaman for anyone unfamiliar with the character. He’s a hybrid born from an Atlantean princess and a human. Namor protects the seas from any threats, and he has classic abilities like superhuman strength, speed, and breathing underwater. However, while not seen in the trailer, he also can fly unlike his DC counterpart. Namor’s powers are considered a mutation in the comics. With the MCU slowly introducing mutants with Doctor Strange in the Multiverse of Madness and Ms Marvelit remains to be seen if Marvel will continue down this path with the Namor character.

In the trailer itself, we see a very menacing-looking version of the character, pointy ears and all. Also, like many of the comics, Namor is a king in the MCU. Most likely of Atlantis, but it’s not mentioned in the official plot synopsis or trailer. Namor and his army of him are the main villains of the film. They couldn’t come at a worse time as Wakanda is mourning the loss of their King. That is sure to give Namor the upper hand, at least at first.

See also  This cat-like "remake" of 'Titanic' is a marvel

Namor for a long time was one of the characters considered too tough to translate outside the comics. This was mainly due to his green one-piece Speedo look on him, but Marvel once again has found a way to crack this seemingly impossible code. It’s funny because they didn’t do much to update Namor’s costume. He’s still wearing the green trunks (though considerably longer) and his winged feet are intact, but the cool additional armor pieces go a long way to make this once absurd look work on screen. It also helps that Huerta owns the costume. They tease him throughout the trailer and, in the few small glimpses we get, Huerta is extremely intimidating.

This extends to Namor’s army who add such a visually distinct element to this sequel. That already helps separate the film from the original Black Panther. There are times when Wakanda Forever could be mistaken for the next Avatar film. That’s how visually stunning and interesting this trailer is which has a lot to do with Namor’s involvement.

There was a lot of speculation on how Marvel would handle this sequel given the tragic passing of Chadwick Boseman in 2020. However, this weighty trailer that focused on honoring his legacy can make MCU fans rest easy. Not too easy though as Namor is lurking in the depths below. His presence of him gives this story an epic, almost war-like, film feel to it where we’re sure to get at least a few mesmerizing battles between the Dora Milaje and Atlanteans. While the teaser or synopsis doesn’t indicate what the two kingdoms are fighting about, we are sure to learn more closer to the film’s release. Black Panther: Wakanda Forever releases in theaters on November 11, 2022, and, until then, you can view images of Namor in all his glory from the trailer below.

While we wait to learn more about Namor, check out the new images from the Black Panther: Wakanda Forever below trailer:

Find out more about what happened during Marvel Studio’s Hall H panel: