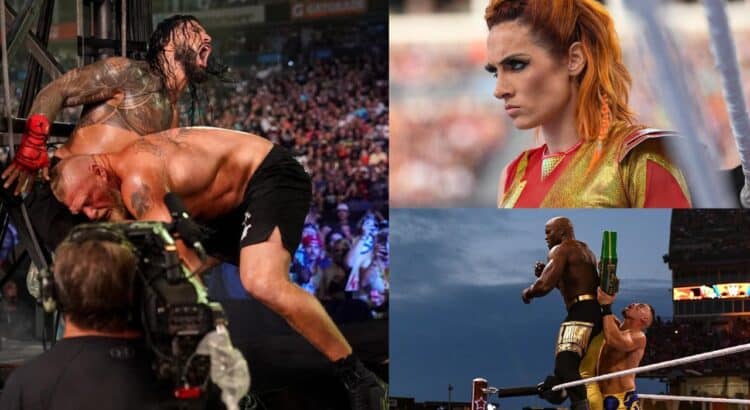 summer slam 2022 is now in the books. Just one year earlier, WWE stormed Allegiant Stadium in Las Vegas for what in many ways felt like a full-throttle return to packing major venues after the advent of the pandemic. Not quite a year later, fans took in the first SummerSlam to ever occur in the month of July, emanating from Nissan Stadium in Nashville.

The show features familiar elements like Roman Reigns and Brock Lesnar clashing over the Universal Championship, but also had the compelling subtext of being the first PPV with WWR under Triple H’s creative direction. Like other major events, SummerSlam came complete with its share of hidden highlights and noteworthy pieces of trivia.

WWE has widely touted the fact that Roman Reigns and Brock Lesnar had a WrestleMania trilogy, with all three matches sharing the unique distinction that they closed the show (a feat even Steve Austin vs. The Rock and Triple H vs. The Undertaker didn’t match).

The Head of the Table and The Beast have now also closed out three SummerSlams, first by composing half of the main event Fatal Fourway in 2017, then by squaring off in another Universal Championship match in 2018.

6 Becky’s Red And Yellow Gear Beckons Back To Hulkamania

Becky wore a red and yellow color scheme into her Raw Women’s Championship match with Bianca Belair. Like Hulk Hogan or not, in wrestling, this color scheme can’t help but hearken back to him. That’s a fair choice for SummerSlam, where Hulk Hogan went undefeated for his career across six matches.

Related: Every Hulk Hogan Match At SummerSlam, Ranked From Worst To Best

While fans pointed out her gear was super hero-like, or looked like Heat Miser from The Year Without A Santa Claus, it’s possible she was serving multiple purposes at once. The homage to Hogan could also be seen as a subtle bit of foreshadowing given Hogan’s status as one of the biggest babyfaces in WWE history and Lynch’s apparent major face turn in the aftermath of her match.

At SummerSlam, Theory challenged Bobby Lashley for the United States Championship. It was actually the second time Theory challenged Lashley for a title this year, with the first instance coming inside the Elimination Chamber for the WWE Championship. There was an interesting parallel between the two contests. The story told back in February was of opponents crashing through Lashley’s pod to injure and remove him from the match (to cover for a legitimate injury). Meanwhile, at SummerSlam, Theory attacked Lashley with the Money in the Bank briefcase to again impose some kayfabe suffering that looked as though it could cause a rare loss for The All Mighty, though he recovered this time.

Despite its impressive 35-year history, 2022 actually marked the first year when SummerSlam was main evented by a Last Man Standing Match. Interestingly enough, that adds to a catalog of one-time-only gimmick matches that have closed out The Biggest Party of the Summer, including singular editions of main event Elimination Chamber, Hell in a Cell, TLC, Elimination Tag Team, and Falls Count Anywhere matches in the event’s past.

3 Every Match Except The Bianca Belair Vs. Becky Lynch Rematch Included At Least One Wrestler Who Didn’t Work SummerSlam Last Year

It’s a bit of a testament to injuries, changes of plans, and the changing landscape of WWE that all but one match on this year’s SummerSlam card included at least one wrestler who wasn’t on the card the year before. That includes Theory, Pat McAfee, The Street Profits, Logan Paul, The Miz, Liv Morgan, Ronda Rousey, Finn Balor, and Brock Lesnar all returning to SummerSlam after at least a year off (or working the event for the first time). The only match with two 2021 participants was Bianca Belair and Becky Lynch working a rematch and even that feels like a technicality, given their match with each other lasted under ten seconds last year.

two The Finish To Liv Morgan Vs. Ronda Rousey Pays Homage To Brock Lesnar Vs. The Undertaker

The finish to Liv Morgan vs. Ronda Rousey was married with controversy. While Morgan stole the pin, she did so after having appeared to tap out to Rousey’s armbar. The moment felt a bit like an homage to the SummerSlam 2015 main event, in which The Undertaker tapped when he knew the ref couldn’t see his hand, causing Brock Lesnar to release his kimura, only for The Dead Man to keep fighting and steal the official victory via Hell’s Gate.

Related: Why History Shows That Brock Lesnar Was The Right Choice To End The Undertaker’s WrestleMania Streak

The execution seven years back was a good bit cleaner, given the clearer deception by The Undertaker, desperate to win when he was out for revenge in their heated rivalry, and a clear chain of events followed as Lesnar had good reason to release his signature hold . Rousey did n’t actually release her hold on her, which raises questions about why Morgan tapped out at all when she had a counter ready to get the pin without the benefit of The Baddest Woman on the Planet easing off.

Jeff Jarrett is having a unique month to say the least as, within a week span he was revealed as both the special guest referee for the SummerSlam match between The Usos and The Street Profits, as well as a participant in the bout billed as Ric Flair’s Last Match, teaming up with Jay Lethal against The Nature Boy and Andrade the night after SummerSlam in Nashville. So, Jarrett officiated WWE’s biggest tag match of the night, with the unified Tag Team Championship on the line, and will follow it up by working the biggest tag team match of his own he’s had in quite some time.