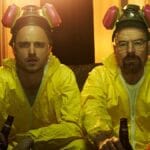 Ahead of Bryan Cranston and Aaron Paul’s expected return as Walt and Jesse on “Better Call Saul,” the “Breaking Bad” stars were on hand with series creator Vince Gilligan to unveil a statue of the infamous meth dealers at the Albuquerque Convention Center this weekend .

Just as “The Sopranos” brought the world’s attention to Newark, “Breaking Bad” made Albuquerque, New Mexico, arguably the most famous city on television during its run from 2008 to 2013, following Walter White’s Jekyll-and-Hyde transformation from a downtrodden high school teacher to a violent meth dealer, all at the cost of his family. At the same time, Walt’s meth-cooking partner and former student, Jesse Pinkman, underwent a painful maturing process that culminated with the Netflix epilogue film “El Camino.”

“While the stories might be fictional… jobs are real every single day,” Mayor Tim Keller said at the statue’s unveiling. “The city is also a character. … We see ourselves in so many ways, good and bad.”

Of course, the idea of ​​a city unveiling a statue of a pair of TV criminals has some pointing out the icky implications.

Gilligan, who commissioned the statue with “Breaking Bad” producers Sony Pictures Television, acknowledged how not everyone would see Walt and Jesse as statue-worthy figures.

“In all seriousness, no doubt some folks are going to say, ‘Wow, just what our city needed.’ And I get that,” Gilligan said. “I see two of the finest actors America has ever produced. I see them, in character, as two larger-than-life tragic figures, cautionary tales.”

The popularity of the series has continued with its equally acclaimed spinoff “Better Call Saul,” which is also set and filmed in Albuquerque and is airing its final episodes on AMC. Both shows have been credited with a dramatic rise in fortunes for the city’s tourism and film industries, with shows like “Stranger Things” and movies like Zack Snyder’s “Army of the Dead” being shot in New Mexico.

Watch the unveiling of the statue in the Twitter video below. 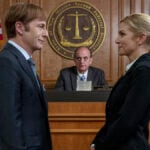