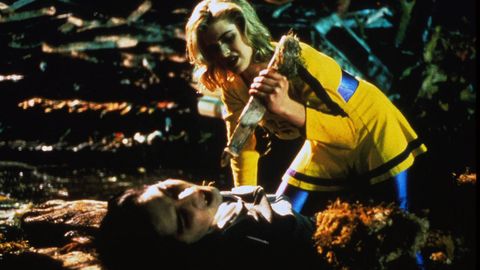 Joss Whedon was practically nobody when he wrote the script for his first film at the age of 25. A descendant of comedy writers (his grandfather John wrote episodes of ‘The Dick Van Dyke Show’, his father Tom of ‘The Golden Girls’), he himself had worked on the sit-coms ‘Roseanne’ and ‘Sweet home…sometimes!’. His idea for a feature film about the frivolous posh teenager who discovers that his mission in this world is to kill vampires was not received in Hollywood with much anticipation and interest.

Like many of the great injustices in this world, Dolly Parton had to come to solve it. It was her producer, Sandollar, who bought the script in the fall of 1991 and began developing it with director Fran Rubel Kuzui, who had made her debut a few years earlier with the indie comedy ‘Tokyo Pop’.

Conceived as a comedy for teenagers that parodied vampire movies, ‘Buffy the Vampire Slayer’ was quickly taking shape. So the filmmaker and her husband, producer Kaz Kuzui, cast Luke Perry to play the lead’s romantic interest. Perry was a star in the making thanks to his role as Dylan in ‘Sensation of Life’, for which 20th Century Fox showed a sudden interest. With a large studio behind it, the film was already a reality, but Whedon would soon learn one of the hardest lessons a screenwriter learns in Hollywood..

A movie for kids made with little time and money

“People ask me, ‘What’s the worst job you’ve ever had?’ And I answer: ‘I was once a screenwriter in Hollywood.’ What they do is take the shine off movies. Almost all my experiences have been bad.. Whedon didn’t mince words in this interview to A.V. Club. When he said these words in 2001 he had already written ‘Alien: Resurrection’ and collaborated on the writing of ‘Speed’, ‘Twister’, ‘Waterworld’ and ‘X-Men’, seeing on each occasion how the script was blamed for what which, in his opinion, were misdirection, interpretation, or poor decisions made by the studios. (On the other hand, he was also one of the writers of ‘Toy Story’, not everything could be bad.)

‘Buffy the Vampire Slayer’ was his first disappointment with the Hollywood production system. To get started, 20th Century Fox joined the project in late 1991 on one condition: it had to be released the following summer.. That gave the team very little time to get the film off the ground, specifically five weeks of pre-production and six weeks of shooting. In cinema, time is literally gold, and the less you invest in your film, the less likely it is that something of quality will come out (other shoots are simply jinxed).

The cast was adding names, some of them tall. For the lead, Whedon had thought of Alyssa Milano, a young star at the time, but finally the chosen one was Kristy Swanson, an actress who had worked in a handful of films, never with such an important role. The budget of about 7 million dollars did not go far. Two actors with a lot of experience and pedigree like Donald Sutherland and Rutger Hauer would play Buffy’s vigilante, Merrick, and the vampire Lothos respectively. To play Lothos’s assistant, the vampire Amilyn, they cast Paul Reubens, a comedian best known for his character Pee-wee Herman and who would end up being one of the most celebrated members of the cast by both audiences and Whedon.

Neither the studio nor the director shared the writer’s vision of the film. If he had written a story with a darker undertone, 20th Century Fox wanted a light teen summer comedy that stayed within a PG-13 rating. (Usually that prevents the movie from having sex, blood, extreme violence, and moments considered too adult for their emotional ramifications.) As a consequence, some elements were changed, such as Merrick’s death, a suicide in the original script, or removed such as the climax in which Buffy locked all the vampires in the school gym and set it on fire. In the film, some retouched moments are clearly seen in the editing room, like that scene in which Buffy cuts off a sausage as if it were the member of a boy who is bothering her (only the reaction faces are seen on the screen, not the own act).

For his part, Kuzui approached the assignment as a minor film, describing it in interviews as “a movie for kids that Fox wanted us to do fast”, and making it clear that it was not art but entertainment. The protagonist also had this attitude, as she made clear in a talk with Los Angeles Times: “It’s a very ‘camp’ movie. It’s just pure entertainment madness.”.

It had to be painful for Whedon to see the team approach his script with some disdain. And he saw it up close, because he was very involved in the filming, at least until he decided to distance himself from the film…because of his animosity towards one of the actors. “I was there for almost the entire shoot. In the end I basically threw in the towel because I couldn’t be around Donald Sutherland anymore.”would tell years later. “I saw a lot of stupid behavior from actors who were too high and a director who had a different vision than mine, and it was her right, it was her film, but it was frustrating”.

As for Sutherland, Whedon described him as “just an asshole”. “He would rewrite all his lines, and the director would let him. He doesn’t know how to write, because he’s not a writer, so the dialogue didn’t make sense. And he had a very bad attitude. He was incredibly rude to the director, rude to everyone around him, he was a pain in the ass.”. Ironically, in recent years several actors who have worked with Whedon, such as Charisma Carpenter, have had similar accusations against him.

A failed movie, a cult series

What came to materialize on the screen was a movie that never finished working. The tone was influenced by teen black comedies like ‘School for Young Killers’, but most of the jokes weren’t funny (the studio had removed much of Whedon’s writing because they considered his humor too abstract and niche). The direction is flat and clumsy, the editing is sloppy, and the whole is saved by the short length and some good performances (it was Hilary Swank’s first film). Swanson isn’t all that bad, but seeing this stripped-down version of the character after meeting Sarah Michelle Gellar’s tormented, angry, sarcastic Buffy is painful.

Yes, there are certain flashes in the film of what we would end up seeing years later in ‘Buffy the Vampire Slayer’, the series. Some jokes are pure Whedon (like when Amilyn yells at a scion ‘Kill him a lot!’) And there’s the interesting idea around Buffy’s desire to be a normal girl and deny her destiny. It also has a feminist message that was not very common in commercial productions, and that would later be expanded in the series. “I think kids are going to love the fact that Buffy is the hero and Pike is ‘the damsel’”the actress thought. “Usually the guy is the one who kills the vampires or takes on the bad guys. I think girls are going to like that Buffy is the hero, and I hope she scares the boys.”.

‘Buffy the Vampire Slayer’ Wasn’t a Box Office Flop. 20th Century Fox spent a lot of money on advertising and filled the cities with posters hoping it would appeal to younger audiences, and as a result the film grossed over $16 million. Enough for the studio to recoup its investment, but not much more.

Today, Buffy is one of the clearest examples in recent Hollywood of how a studio can take a good idea and make a bad movie out of it, destroying the spirit of what the writers had envisioned along the way. Five years later, a series was released that would allow Whedon to develop his ideas and would become one of the most revered and studied fictions in the history of television.. In it, Merrick did commit suicide and Buffy burned down her high school gym.

Javier P. Martin
Graduated in Audiovisual Communication, he is the typical one who entered the race wanting to be a film director until the nonsense was removed after 15 minutes.