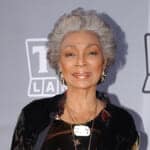 The death of “Star Trek” legend Nichelle Nichols Sunday opened the flood gates of mourners, who remembered her not only for her cosmic contribution to the entertainment industry as one of the first Black women featured in a major TV series but also for the warmth and generosity of her soul.

George Takei, who worked alongside her on the Enterprise bridge during the 1966-1969 run of the original “Star Trek,” was grief-stricken by the news, writing, “my heart is heavy, my eyes shining like the stars you now rest among, my dearest friend.”

Fellow “Star Trek” actress, Kate Mulgrew — who appeared on “Star Trek: Voyager” — called Nichols a “trailblazer” whose “grit, grace, and a gorgeous fire we are not likely to see again.”

Others in the “Star Trek” universe also expressed their sympathies, like Jeri Ryan (“Star Trek: Voyager,” “Star Trek: Picard”) and Marina Sirtis (“Star Trek: The Next Generation”), who said Nichols “led the way and opened the door for the rest of us who followed in your wake.”