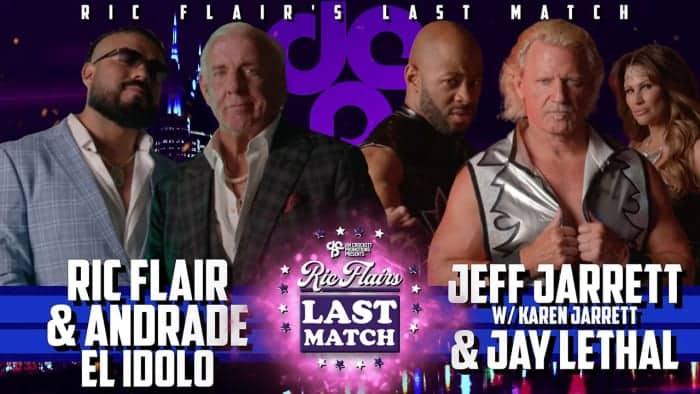 The in-ring career of Ric Flair will end once again Sunday as “The Nature Boy” takes to the ring for a final time at Ric Flair’s Last Match to cap off Starrcast weekend in Nashville, Tennessee.

Flair teams with son-in-law Andrade El Idolo to take on Jeff Jarrett & Jay Lethal in a storyline that has played out in the preview series running up to tonight’s pay-per-view.

The card itself is a melding of talent from AEW, Impact, NJPW, MLW, the indies, and past stars.

Among the matches, Impact World Champion Josh Alexander will defend against Jacob Fatu while Knockouts Champion Jordynne Grace defends against Deonna Purrazzo and Rachael Ellering in a three-way.

Jonathan Gresham vs. Konosuke Takeshita vs. Alan Angels vs. Nick Wayne is a highly anticipated four-way as is Rey Fenix ​​vs. bandit vs. Taurus vs. Laredo Kid.

The show will also feature The Briscoes in action, plus a bunkhouse battle royal.

Tony Schiavone, David Crockett and Ian Riccaboni were on commentary for the first pre-show match. There was a set for the commentators that resembled the old Jim Crockett Promotions set from the 1980s World Championship Wrestling on TBS.

This was a great back and forth match, much like you’d see on the opener of a New Japan show. Ren Narita got the ring with a fantastic finish, catching Uemura with a belly to belly suplex and bridge to get the pinfall.

– Tony Schiavone called out Ric Flair for a promo, but got Jay Lethal and Karen Jarrett instead. Lethal did his best Ric Flair promo and promised to embarrass Ric Flair. “It’s going to get real uncomfortable in here.” Karen Jarrett ran down the women from the 80s, prompting a “Who are you?” chant from the crowd. Karen Jarett said that Ric Flair was willing to die in this last match, and Jeff and Jay Lethal would give him his wish from him.

– This was followed with a pretaped Lethal/Jarrets promo.

– Al Snow, the former Santino and someone named “Frank the Clown” were shown in the crowd. The Clown ran into the ring to interrupt the start of the Bunkhouse Stampede and insult “Flair’s last chase grab before he dies.” Jacob Fatur ran in to chase Frank the Clown down the aisle. Mick Foley cut off the Clown and tossed him back in the ring. Fatu gave The Clown a superkick and an avalanche in the corner.

The winner will receive a bronze boot and gold belt buckle. Dave Prazak joined Schiavone and Crockett on commentary.

This match was trash with a bunch of low level indy guys.

James Storm and Bully Ray were the last two to make their entrances and start the battle royal. Nick Gage crashed the match less than a minute in and he brought a bunch of wrestlers from Game Changer Wrestling (including Joey Janela and Blake Christian) with him. I don’t think Gage actually participated in the match. All the Game Changer wrestlers went after Bully Ray. Big Damo was eliminated early. Jordan Oliver hit a nice inside the ring cutter on Crimson, who was eventually eliminated by the GCW contingent.

Crowbar went to the top, but was eliminated by Effy. Effy and Bully Ray then did the “wazzup” Dudley Boys spot. Bully Ray then pitched Effy and a bunch of other GCW guys.

The final four got down to James Storm, Bully Ray, Joey Janela and Mance Warner. Warner eliminated Storm and Bully Ray eliminated Janela. Bully Ray pulled a table out of the ring and powerbombed Warner through it. Warner then reversed Bully Ray’s attempt to toss him out to eliminate Bully Ray. Mance Warner got the win. If I were watching this preview show to decide whether or not to buy the show, I would have turned the show off.

– Sting sent in a video message thanking Ric Flair for putting him on the map. In another video message, Jim Ross called Ric Flair “the best he’s ever seen.” Mick Foley, James J. Dillon and Vickie Guerrero were shown in the crowd. A second video message from Cody Rhodes was played.

– Mick Foley got a house mic and took some shots at Al Snow and Tony Schivone. “I think I put one or two butts in some seats.”

A pre-taped intro from Bob Caudle opened the show, with Tony Schiavone and David Crockett on commentary for the main show (along with many guests throughout, it looks like). Hugo Savinovich and Carlos Cabrera were on Spanish Commentary.

Scott D’Amore from Impact Wrestling joined the commentary team for this match.

It took a bit for the Wolves to get in sync. Shelley took a lot of punishment from the Wolves once they established control. Shelley went for an enzyme, but Richards caught him with an ankle lock. Sabin tried to run in, but Edwards rolled him into a single leg crab.

Sabin got the hot tag and hit both the Wolves with a crossbody off the top, then took Edwards down with a spinning DDT. Sabin hit both Wolves with a dive onto the floor. The match broke down. Richards hit a backpack stunner on Shelley, and Edwards came off the top with a double stomp for a near fall. Sabin caught Shelley with a cutter. The Guns finished off Edwards with the Skull and Crossbones (a hangman’s neckbreaker/crossbody combo) to get the victory. This was a good opener.

Joe Dombrowski joined the commentary team for this match.

Smith and Kross went back and forth exchanging backdrop suplexes. Kross countered a European uppercut attempt with a backslide for two. Kross got a choke, but Smith countered with a rollup attempt for two. Kross hit a forearm to the back of the head called “The Quickening” and got the pinfall in an out-of-nowhere finish. Not much to this one.