WWE SummerSlam 2022 review: The start of a new era 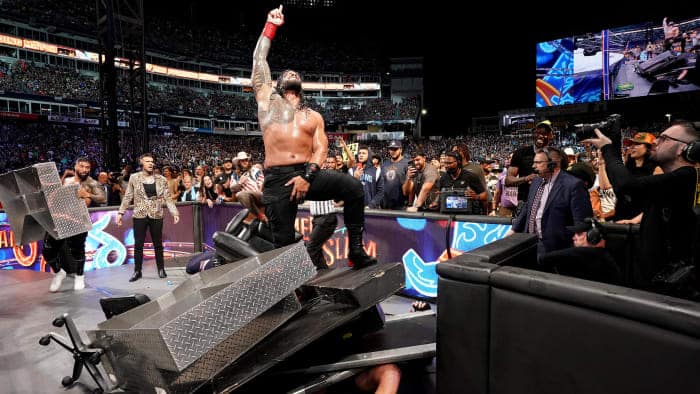 SummerSlam marked the first show of a new era. And by the end of the show, things did seem to trend towards positive changes. But as usual, there was one constant: Roman Reigns ending the show as champion.

Reigns managed to beat Brock Lesnar for a second time this year to retain the Undisputed WWE Universal Championship, though it required an army of men to do it, including The Usos, Paul Heyman, and Theory, who after weeks of television hype failed to cash in his Money in the Bank briefcase. The match was a huge improvement from their WrestleMania bout, which failed to meet WrestleMania main event standards. This was a wild brawl, including a tractor that at one point lifted the ring, sending Reigns tumbling down to the floor. It was an awesome spectacle and capped off the show in a positive way. And since Drew McIntyre defeated Sheamus on Friday’s SmackDown to become Reign’s next challenger, we do know that is the direction for the next five weeks leading to September 3’s Clash at the Castle in Wales.

As many will likely do in the weeks following Vince McMahon’s shock resignation from WWE on July 22, it was easy to see the Triple H changes during SummerSlam, most of them being for the better. The finishes were clean and simple, save for the SmackDown Women’s Championship match. Commentary felt much more at ease, with announcers less focused on trying to argue with one another and refrained from drowning the home audience with branding and buzzwords, a McMahon staple that had intensified in the last year.

At one point in the show, Corey Graves told Micheal Cole that he “liked it better when he didn’t have an opinion.”

But perhaps the biggest indicator things have changed was following the Raw Women’s Championship match that kicked off the show. After an excellent match between Bianca Belair and Becky Lynch (and a handshake seemingly made to turn Lynch face), Dakota Kai (who was released from WWE back in April) and Io Shirai (which recent reports indicated her future with the WWE were unclear) joining with a returning Bayley to form a new faction, setting their sights on Belair and Lynch.

Both Shirai (now going under the name IYO SKY) and Kai had languished in the WWE developmental system for years, seemingly because those in charge didn’t see any reason to bring them up. But with McMahon gone, and Shirai and Kai both having memorable runs in NXT 1.0 under Triple H, it’s clear to see why the moves were made, and who was responsible for bringing them back.

Matches up and down the card were solid to good. The two big celebrity matches delivered, with Logan Paul and Miz turning out to be a good match thanks to Paul’s athleticism, including a giant frog splash off the apron to the commentary table outside the ring. It remains to be seen what kind of schedule Logan will have for the rest of the year, but given this is his second match, and he came out of the match looking far better than most in NXT that have had more experience, it’s possible he could be a contender for rookie of the year. And that is high praise for a year stacked with contenders such as Hook, Nick Wayne, and Bron Breakker.

Pat McAfee and Happy Corbin also had a good match, though it was a bit clunky at times. McAfee impressed during his run in NXT, and this was his first match on the main roster where he didn’t have an impromptu wrestling match with a 76-year-old immobile man. The match wasn’t entirely smooth, and Paul had more athleticism, but McAfee didn’t look bad and had a cool finish, a springboard code red.

Edge made his return to the company, coming out in a spooky entrance that came off as an updated version of the old Brood entrance, to attack Judgment Day, who threw him out of the group following Hell in a Cell. After losing clean on Raw, another loss for Finn Balor and Damian Priest puts them in a bad position. But they do have a direction going forward, as it’s clear Edge will likely face off against Judgment Day in some sort of match down the line, probably at Clash of the Castle.

The rest of the card had The Usos retain the Undisputed WWE Tag Team titles against The Street Profits in a match that was fine, but paled in comparison to the match they had at Money in the Bank earlier this month. Bobby Lashley defeated Theory in under five minutes to retain the United States championship in a match that was mostly meant as a reminder that Theory could play spoiler later in the show, which ended up not happening.

Liv Morgan retained the SmackDown Women’s Championship following a short match with a wonky finish that involved Rousey’s shoulders being counted by the referee as Morgan submitted. Rousey then attacked Morgan after the match and attacked the referee as well. The finish clearly means that another match is coming, likely in Wales, but it remains to be seen if this was a heel turn for Rousey or just someone with a chip on their shoulder from her heading to the next match.

SummerSlam was the first show under the Triple H regime, and it was largely a success. The changes were noticeable throughout the show, and the hangups I’ve had in the past with the announcing and verbiage were mostly non-existent. The next few weeks of television, however, will tell the real story of what changes are coming to WWE following McMahon’s exit.