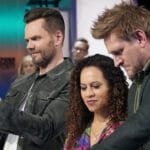 Six seasons and a movie has long been the rallying cry for fans — and the cast — of “Community.” And, according to series star Alison Brie, there’s more movement than ever on that potential follow-up film.

“You know what, I’ll say it. There’s been movement,” Brie admits in an upcoming episode of WrapWomen’s “UnWrapped” podcast. “There’s been some talks. People are talking and certain things — wheels are turning. I said it!”

Brie’s comments come on the heels of her co-star Joel McHale, who gave fans a tease at the end of June. I have played a bit coy on the matter, telling comicbook.com that he was “more optimistic” than ever, and that “interest has returned,” but noted that there are lots of factors that need to go into making a film happen. But now, Brie is prepared to give fans a little more concrete hope.

Of course, like McHale, Brie would add the caveat that things can always change and that yes, there are a lot of moving parts to the process. But, she notes that the serious conversations happening now are further than they’ve ever gotten before.

“I’m saying there are legitimate conversations that are happening. Whether or not they will ever turn into an actual movie — I would love it if they did, and I hope that they do,” she continued. “But the fact alone that actual real conversations are happening is I think the most progress we’ve ever made on that front.”

Series creator Dan Harmon said last summer that he “formalistically” owes a movie that “Community” fans can not just enjoy, “but they can stand back and go, ‘You know, the crazy thing about this movie is that if you didn’ t know there was a show, this is an insanely good movie.’”

Of course the question then becomes, where would the movie end up? The show’s original home, NBC, effectively has its own streaming platform in Peacock. But NBC canceled “Community” after Season 5, and the sixth and final season of “Community” subsequently ran on Yahoo’s now-dead streaming service, Yahoo Screen. The show was produced by Sony Pictures Television.

All six seasons of the show are currently streaming on Netflix.