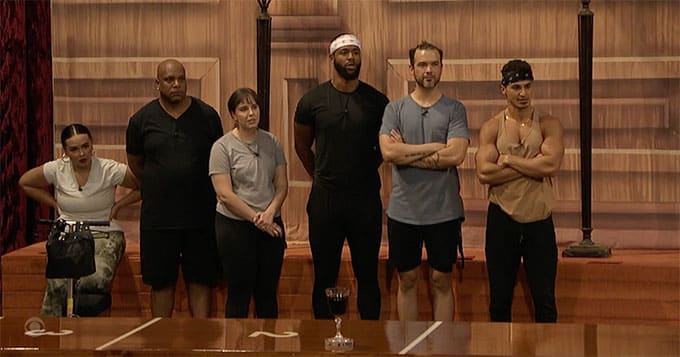 We are now one month into Big Brother 24, and a lot has happened. So I thought now would be a perfect time to take a look at the state of the game.

If you’ve been following along since the start, a lot of us (bloggers and fans alike) were getting pretty worried about Big Brother 24. Week 1 was looking pretty ugly and quite boring. And Week 2 started off on a really bad foot also. But then things turned around and Pooch ended up getting blindsided. And from there, BB24 has been on a very entertaining and pleasing upward trajectory.

Who would’ve thought Pooch’s eviction would actually set off a chain of events that would turn the season around. After Pooch left, Turner and Joseph were looking for a little revenge. That lead to some deep thinking and the realization that Taylor was not a problem to them and that the rest of the house was actually in the wrong with how they were treating her. The guys, along with Monte and Kyle formed “The Pound” and decided that they need to go after the people behind Pooch’s demise — the women, particularly The Girls Girls alliance. So Ameerah became the target. But the guys couldn’t make that happen with just the four of them. So they listed outsiders, Michael and Brittany to join them. And then they found their secret weapon in Taylor. Up until that point, Taylor had been all alone, so they pulled her in de ella and the seven of them became “The Leftovers.” And now that alliance is currently the major storyline of Big Brother 24, and why bloggers, Live Feed watchers and fans are no longer bored.

Ameerah’s eviction last week was the kind of true blindside we love. No one spoiled it like we have seen in modern Big Brother (I’m looking at you, James Huling). We had jaws dropped and tears flowing. It was the kind of moment that made us all fall in love with Big Brother in the first place.

So after that eviction, we were rooting for The Leftovers alliance to keep up their momentum. We don’t want a steamroll, of course, but we could use one more week to just finish drawing that line in the sand. And Monte wins HOH, and we get just that. So now the nominees are Indy and Alyssa, and there’s a plan to backdoor Nicole. But Daniel and Nicole don’t realize that’s the plan exactly. Well, they think it was a plan, but they don’t see how it could actually play out, especially now that Monte, after talking to Michael and Brittany, tried to switch it to just taking out Alyssa this week. That would likely put Indy as Michael and Brittany’s bestie, and she could be their shield from her.

But something really funny happened when Monte tried to make sure Daniel or Kyle don’t use the veto this week. Daniel thinks that means Monte is afraid of losing Taylor, so now Daniel REALLY wants to use the veto, so that Taylor and Nicole go up. Daniel thinks they have the numbers to send Taylor out. But really, he’s just pushing the Leftovers back to Plan A, thus sealing his No. 1 ally’s fate in the game. Daniel is actually going to be one of the main reason’s Nicole goes home this week.

So we have good gameplay meets bad gameplay and then chaos ensues. And when we aren’t seeing this all play out at ceremonies and meetings, we have really intense gaming talks among both sides of the house. The Leftovers are PLAYING the game. And they’re always talking about it. Joseph and Kyle are always plotting. Michael is always thinking ahead. There’s just a lot of great Big Brothering going on. And we are grateful.

Will it last? It’s hard to say. This could go a few ways. Things could blow up fast and fall apart and get ugly again. Or the Leftovers could steamroll and make it kind of boring. Or we could get some power shifts, like old-school BB and have one of the best seasons in recent memory. It’s Big Brother after all, and you know the motto. I hope it continues to entertain and impress because it makes my job so much easier when I don’t hate everyone and actually enjoy the gameplay.

I’ve already seen some concern among fans that The Leftovers could dominate the game and that’s not the ideal scenario for everyone. And I get that. It is really fun when the power shifts back and forth (that’s one of the reasons why Big Brother 6 remains one of the most popular seasons). But I wouldn’t mind a little bit of a steamroll because I really don’t like the other side of the house. I mean, look how BB6 ended. We loved the season, but not that finale, right? The Cookout steamrolled last season, and it remained entertaining (albeit frustrating) when they had to turn on each other. So maybe we can just look forward to that moment with The Leftovers… I don’t know. I just know I’m enjoying the moment and want to keep that up for awhile.

What do you think of Big Brother 24 currently, and what do you want to see happen?