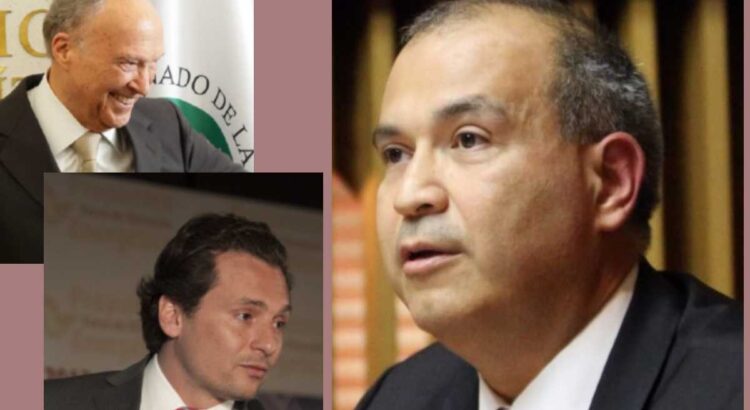 The legal advisor to the former director of Pemex between 2017 and 2018, Carlos Alberto Treviño Medina, filed a complaint against the Attorney General of the Republic (FGR), Alejandro Gertz Manero, and the FGR Competence Control Prosecutor, Juan Ramos López , for alleged torture, cruel and degrading treatment against Emililo Lozoya Austin and his relatives.

The complaint filed with the Special Prosecutor for Human Rights, in charge of Sandra Irene Herrerías, indicates that derived from torture, Emilio Lozoya, also former director of Pemex between 2012 and 2016, presented false testimonies against Treviñowhich were used by the FGR to initiate criminal proceedings for the crimes of criminal association and money laundering.

In the complaint, Treviño Medina, through his lawyer Oscar Augusto Zamudio Campos, points out that the head of the FGR, Alejandro Gertz, and the prosecutor Juan Ramos, they pressured Emilio Lozoya and his relatives to sign the complaint in which he accused Carlos Treviño of the alleged diversion of public resources, accusation for which there is an arrest warrant against him.

Treviño Medina’s defense argues that this is a fabricated casefor which it intends to demonstrate the torture against Emilio Lozoya and thus invalidate the complaint of facts that gave rise to the accusations against Treviño himself, former federal deputies such as Ricardo Anaya and former senators such as Jorge Luis Lavalle Maury.

As is public knowledge, the FGR offered undue benefits and at the same time pressured EMILIO RICARDO LOZOYA AUSTIN through threats, accusations and pressure against him and his relatives to get him to sign a false facts report ‘voluntarily’, which It was demonstrated from the omission of all the authorities to apply the Law for the Protection of Persons Involved in Criminal Procedure.

In the legal appeal, Gertz Manera is also accused of forcing Emilio Lozoya to change his trusted lawyer, former anti-drug prosecutor Javier Coello Trejo, for other defenders imposed by the prosecutor.

In addition, they were forced to revoke and change the defender they trusted and to withdraw from the protection claims that the negotiators EMILIO LOZOYA THALMANN and his son JUAN JESÚS LOZOYA AUSTIN had filed for fear of being arrested.

Treviño’s defense argues that the actions of the FGR and the violation of Emilio Lozoya’s human rights are independent of the accusations he faces for allegedly receiving bribes in the Odebrecht and Agronitrogenados cases.

This proceeding and serious violations of the rights of Mr. EMILIO LOZOYA, without prejudice to his responsibility for the bribes received exclusively by him, have been classified as torture in light of the criteria of the First Chamber of the Supreme Court of Justice of the Nation. that derived from what was resolved in the Direct Amparo in Review 807/2020.

The criteria invoked by Treviño’s lawyers in the aforementioned amparo maintain that any ministerial statement that is the product of physical or psychological coercion or torture must be invalidated, since the objective of the statements may be to incriminate third parties in criminal acts, thus violating human rights.

For the complaint to prosper, the former director of Pemex himself would have to ratify the accusations and later render a new statement, but ministerial sources ruled out that this would happen, since it would force Emilio Lozoya to retract all his accusations.