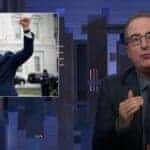 Mehmet Oz may not have been the direct target of any of John Oliver’s segments on Sunday night’s episode of “Last Week Tonight,” but that doesn’t mean the late night host didn’t sneak at least one shot in. And of course, that shot was fired at Oz’s medical advice — and how similar Oliver says it is to advice from the 1950s.

The main topic of “Last Week Tonight” on Sunday was mental health care, a topic which, as Oliver noted, “historically, humans haven’t handled particularly well.” To kick off the segment, he pulled up a video of an ad from 1959, showing a group of “pretty nurses” being sent to a salon as part of their training. The logic at the time — delivered by a typical Mid-Atlantic male voice — was that “If you can persuade a mentally ill woman to take interest and pride in her appearance of her, you may even swing the balance between despair and recovery.

“Yes, those pesky women just need a little pep in their step! A little drip on their lip, a little flash on their lash!” Oliver mocked. “Look at me, I’m a British voice from the 1950s setting the course of science for decades to come!”

Oliver then set his sights on Oz, pointing out just how familiar that course of science actually sounds, considering Oz’s past segments.

“I don’t know what is more alarming there: nurses being forced to take on the skills of a Sephora brand ambassador, or the fact that ‘Can makeup cure sad?’ sounds like an episode that Dr. Oz definitely did.”

Elsewhere in the segment, Oliver mourned the lack of diversity in the field of mental health care, pulling up a video of a Black couple explaining their struggles in finding a therapist they could connect with. As the man in the video explained, he couldn’t find a Black male therapist “for my life.”

You can watch Oliver’s full segment on mental health care in the video above.