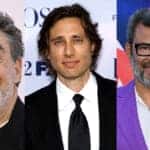 The most essential element of any road trip is facing an epic obstacle — not lost on the creators of “Cars on the Road,” the Pixar spinoff that finds Lightning McQueen and Mater finding heaps of trouble on a long journey away from Radiator Springs.

The new series drops Thursday, Sept. 8, Disney+ announced Monday, the same day it released the show’s first-look trailer (watch above, or below).

In it, Lightning McQueen (Owen Wilson) and best friend Mater (Larry the Cable Guy) are enjoying a quiet life in Radiator Springs when it’s revealed that the rusty tow-truck has a sister who’s getting married soon. These being cars, a road trip ensues.

The nine-episode series is a “romp across the country with Lightning McQueen and Mater,” Disney+ says, a romp that apparently includes a run-in with rival gangs of vehicles in a “Mad Max: Fury Road”-style battle royale.

“Just the tiniest little taste of death!” McQueen enthusiastically says, before the “Cars” cars encounter a car-eating mechanical dinosaur, ghosts of dead cars (???) and those spiky, flaming “Mad Max” warriors (who may just be taking part in a family ritual around the wedding?)

We’ll find out when “Cars on the Road” starts its engines next month.

admin
See also  This Is Us: Top 10 Characters Introduced After Season 1