Netflix: Premieres for the week of August 1 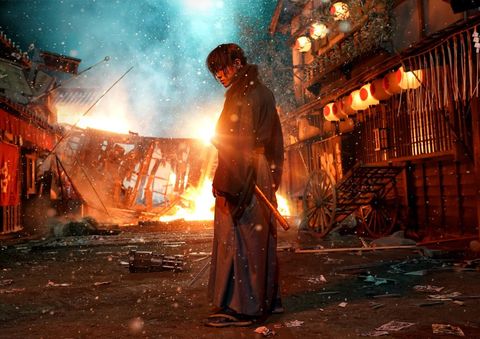 August begins in style on Netflix with the premiere of one of the most anticipated and ambitious series of the year: ‘Sandman’.

The adaptation of the acclaimed play by Neil Gaiman, one of the best graphic novels of all timewill be added to the Netflix series catalog offering us a world of dark fantasy, mythology, legends and occultism while we follow Dream/Morpheus (Tom Sturridge)the personification of dreams.

The first week of August will also see the addition to Netflix movies of ‘The Rise of the Teenage Mutant Ninja Turtles: The Movie’, a new chapter related to the groundbreaking animated series released in 2018 on the platform.

In 1879, Kenshin and his allies face their strongest enemy yet: his former brother-in-law Enishi Yukishiro and his minions, who have sworn revenge.

Woodstock ’99 was supposed to be a millennial event celebrating peace, love and great music. However, the festival degenerated into a scandalous mess, with fires, riots and destruction. Through previously unseen recordings of those events and interviews with a long list of employees, artists and attendees, all present at the festival, this docuseries goes behind the scenes to expose the egos, greed and music that fueled the flames of that chaos for three days.

A year before Yumeko Jabami, the black-haired beauty, entered her school, Mary Saotome, a middle-class girl with a good record, enters the Hyakkao Private Academy, where many young women from the political and financial elite study. What she doesn’t know is that the center has a very strict hierarchical system based on the game. Here academic or sports achievements are worth nothing: what matters is skill in games of chance. Indebted students lose all their rights and become a kind of slave to others. Can Mary Saotome carve out a future for herself in this gaming-ruled academy?

Pressured by their respective families to find a partner, Asha (Pallavi Sharda) and Ravi (Suraj Sharma) pretend to be boyfriends to survive a summer full of weddings… but love ends up between them as they try to reconcile their way of being with what their parents demand of them.

Two months after the outbreak of a deadly epidemic caused by the DMZ virus that has decimated the United States and North Korea, “Carter” wakes up with no memory of his past. He has a mysterious device implanted in his head and a lethal bomb in his mouth. A strange voice gives him orders. The bomb could go off at any moment…unless he rescues a girl who is the only antidote to the virus. But both the CIA and North Korea are hot on his heels. Carter must complete his mission successfully and head north to find the girl. His fight for survival unfolds in this fast-paced film shot in a single, uncut shot.

– ‘The Rise of the Teenage Mutant Ninja Turtles: The Movie‘. Action. Adventure. Animation.

Following the success of the popular Nickelodeon series, Raphael, Michelangelo, Leonardo and Donatello are back in action with their teenage pranksters in this fun-filled adventure. The Turtles face their toughest challenge ever when Casey Jones, a mysterious stranger from the future, warns the brothers of an impending invasion by the most dangerous alien species in the galaxy: the Krang! Will they be up to the task? Will they be the heroes they are meant to be… or will their carefree attitude betray them? The most exciting, emotional and epic adventure ever told of the Teenage Mutant Ninja Turtles arrives.

‘Sandman’ is a mosaic of modern myths and dark fantasy in which current fiction, historical drama and legends are naturally interwoven. The series examines the places and people affected by Morpheus, the king of dreams, as he tries to repair the faults and mistakes he has made in his inconceivably long existence, both on a cosmic and human level.

admin
See also  The Voice: Ariana Grande to give away $ 1 million to fans for mental health