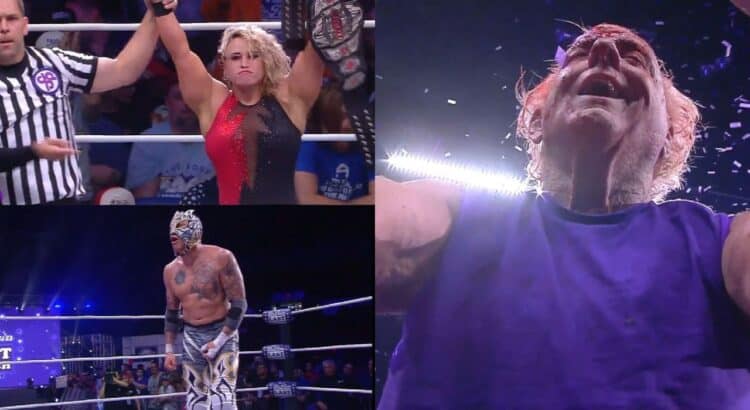 Coming off an extremely well-received WWE SummerSlam, Sunday, July 31, 2022 would see Ric Flair’s Final Match PPV taking place in Nashville as the big finale for the weekend. With it being a major cross-promotional event featuring talent from within WWE, AEW, Impact Wrestling, MLW, GCW, and New Japan Pro Wrestling, this was nothing short of a special event.

RELATED: WWE Summerslam 2022: Every Match Ranked From Worst To Best

Featuring multiple title matches, including Josh Alexander defending the Impact World Championship against MLW’s Jacob Fatu and Jordynne Grace defending the Impact Knockouts Championship against Deonna Purrazzo and Rachel Ellering, the PPV would be headlined by a special tag-team match with Ric Flair and Andrade El Idol vs Jay Lethal and Jeff Jarrett!

Dubbed an MLW Showcase Match, Harry Smith would face off against “The People’s Executioner” Killer Kross, who was also accompanied by “The Smokeshow” Scarlett Bordeaux. Commentary noted that with Scarlett in his corner of him, Kross remains undefeated in singles matches, at least in Major League Wrestling.

It was quite weird to see Kross playing the underdog in the match, especially with it being noted about how strong of an opponent Killer Kross is with Scarlett Bordeaux. The finale would be extremely underwhelming as well, with this ultimately being quite forgettable and a weak showing for both men. Killer Kross would walk out with the victory.

Being given the semi-main event slot, the Impact Knockouts would take the stage with Jordynne Grace defending the Knockouts Championship against current rival Deonna Purrazzo and former partner & former Impact Wrestling star, Rachel Ellering in a triple threat.

Following a potential injury scare to start the match with Rachel Ellering, this match would have a difficult time winning over a crowd that did not seem very interested in it. Still, all 3 women tried their best here, with Ellering even coming back into the match, fighting through her ankle issues. Grace would retain her belt, tapping out her former partner in the semi main event.

Dubbed a legacy tag team match, this bout on the PPV would see Ricky & Kerry Morton representing the Rock N’ Roll Express as they would face AEW’s Brock Anderson & Brian Pillman Jr., representing The Four Horsemen. With the circumstances of this show, it was no shock that Ricky Morton was one of the most over stars on the show, but even the younger wrestlers got good reactions from the fans with this match having a solid crowd.

Similar to the next match, this was only hurt by having a very, very short run time, with Brock Anderson pinning Ricky Morton in a short bout that felt it could have used another 5 minutes or so.

6 The Briscoes vs The Von Erichs

Another big first-time match, The Von Erichs representing MLW would face off against ROH’s Briscoe Brothers, coming off the incredible 2-out-of-3 Falls Match against FTR a few weeks ago.

While this would be a step-down from both The Briscoes’ last big PPV match and the other major tag-team match on this specific show with The Wolves vs. Motor City Machine Guns, this would still be quite good. The Briscoes would take the victory here against the Von Erichs, as they look to rebound from their two losses to FTR.

This multi-man match would see some younger faces of wrestling going at it for a future shot at the Progress World Championship, as DDT-Star-Turned-AEW-Standout Konosuke Takeshita would face off against former Dark Order member Alan Angels, future AEW wrestler Nick Wayne, and Jonathan Gresham, who was met with quite a mixed reaction. With this being Gresham’s first appearance following the massive drama between he, Tony Khan, and ROH, it was certainly interesting to see him back wrestling, especially with AEW and ROH commentators calling the match.

RELATED: Predicting The Future Of These 10 Young AEW Wrestlers

Being contested under wrestling rules, this was a bit weird in terms of structure due to it being a 4-way that required wrestlers to tag in or wait on the apron, but with the talent on display, it would have been hard to be bad . While all four men looked great here, the downside to this match was a lack of time as it felt over before it ever started. Gresham would pick up the win, pinning Alan Angels in a very quick finish.

Main-eventing the self-titled PPV, would be Ric Flair’s final match (for now) as The Nature Boy would team with his real-life son in-law, Andrade El Idolo of AEW against AEW’s Jay Lethal and WWE Executive, Jeff Jarrett . Thanks to an incredible video package highlighting how everyone got to this match, and a fantastic entrance by Ric Flair, this immediately felt like an extremely special affair, and while it was certainly a spectacle, and they had the crowd for the match, it was very clear that Ric Flair should not have been in the ring whatsoever. Whether it be stumbling into the ring without being tagged, having to literally be lifted to his feet and having brass knuckles forced around his fingers, Flair looked to be in a scary condition during the final several moments of this match.

By the end, Flair would be bloodied up, bruised, and beaten as confetti would rain down upon him and Andrade, with Ric reveling in the adoration of the fans. Ranking this on a show that featured some incredible wrestling is difficult, as this got uncomfortable to watch at points and was not good, though the crowd treated it with great respect throughout. Post-match, Flair would cut an emotional promo that would cement this as a questionable choice as he would even admit that he did not remember the match despite it just happening.

A major cross-promotional match on this show would see Impact Wrestling and MLW working together, with Josh Alexander defending the Impact World Championship against MLW’s major player, Jacob Fatu. A first-time ever match, this would be one of the marquee bouts on this PPV, with Alexander and Fatu being the biggest names in their companies.

While this title match could have benefited from some build on Impact Television, this was a hard-hitting spectacle, with Jacob Fatu getting a chance to shine on a bigger stage than the typical MLW one, and Josh Alexander continuing to be a perfect World Champion for Impact Wrestling, carrying the championship with pride and excellent presentation. Unfortunately, the match would end via DQ with Brian Myers, Matt Cardona, and Mark Sterling storming the ring, killing a great match.

two The Motor City Machine Guns vs The American Wolves

Kicking off the PPV, action would begin with an Impact Wrestling dream match with Chris Sabin and Alex Shelley, the Motor City Machine Guns, teaming against Davey Richards and Eddie Edwards as a reunited version of The American Wolves, with Impact’s Scott D’Amore on commentary noting that The Wolves have a heated history with one another and have not tagged in some time. Facing off for the first time in over 12 years, this bout would be only the second match between these two legendary teams.

This was an incredibly fast-paced, exciting start to the show, with both teams impressing and showing off why they are two of the best of the modern era. The Motor City Machine Guns would pick up the win in an excellent tag team match.

1 Bandit vs. Laredo Kid vs. Black Taurus vs. King Phoenix

The second of two wrestling rules matches, this one would actually make sense as it would be a AAA wrestling match, filled with actual wrestling stars, with representation from AEW, Impact Wrestling, and ROH, as Rey Fenix ​​would face off against Laredo Kid, Black Taurus, and Bandit!

Surprising nobody, Rey Fenix ​​would deliver in spades in this match, feeling like the biggest star to the fans in attendance while also performing at the regular high quality he does within AEW. Other than Fenix, Kid and Taurus looked great as normal, while Bandido got a chance to shine ahead of his Impact Wrestling debut, with this match earning the first “This is Awesome” chant of the night! This was incredibly fun, overly-thrilling, and just an insane showcase for all four men, as Rey Fenix ​​would score the win in a phenomenal match.