Seven years after the murders in Narvarte, relatives denounce that the Prosecutor’s Office has ignored evidence and other lines of investigation 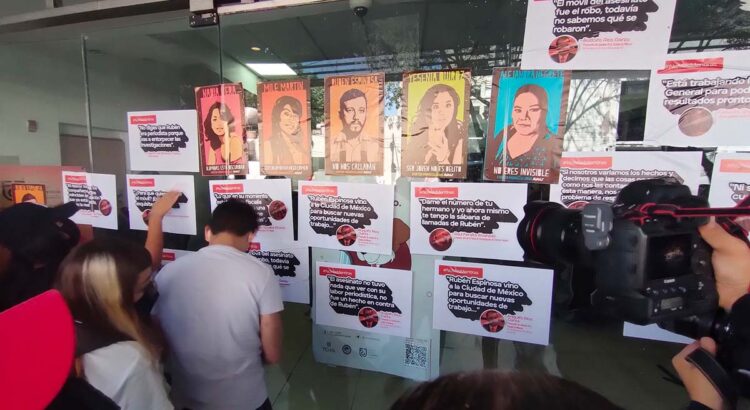 7 years after multi-femicide and homicide in the Narvarte neighborhood, families demonstrated at the Attorney General of Justice of Mexico City (FGJCDMX) pnow report that they have ignored evidence and has refused delve into other lines of research.

“This autonomous prosecutor’s office of Mexico City has refused to integrate this information as part of the file, has refused to delve into these lines of investigation and has remained married to this original hypothesis from 7 years ago,” David Peña denounced. litigant in the case.

On July 31, 2015, Mile Martín, Yesenia Quiroz, Alejandra Negrete, Nadia Vera and Rubén Espinosa they were killed. The then Attorney General’s Office only identified three people responsible and determined that there was no reason.

These three people would have come in a Suburban truck to the scene. In that same van, in addition to a Mustang vehicle owned by Mile Virginia (stolen by those who committed the crimes), they would have fled.

On March 30, Article 19 and the Action Group for Human Rights and Social Justice AC, presented new findings in the casewhich point to at least two other people participated in the crime.

They reported that the The Public Ministry repeatedly requested erroneous data of two mobile phones that would be associated with other participants in the crime.

This Monday, relatives maintain that they participated two more people in the events, a car and another person was involved in the organization.

They also stated that clothes and shoes were discarded, without considering them as evidence, while others orObjects were lost and some were not properly searched.

Patricia Espinosa, Rubén Espinosa’s sister, stressed that they were lost “personal data with valuable information of the victims, such as cell phones, computers and USBs”which were recorded in the file.

“This is evidence that the authorities had in their possession and within their reach, and could have shown more progress from day one,” he reiterated.

Families do not accept the main line of investigation because accepted because the reason is not known, therefore, they demand that other causes be investigated. Among these are potential human trafficking groups, that could be detached from the elements of the folder, according to what they declared in front of the Prosecutor’s Office.

Eduardo Calderón, from Article 19, stressed that the greatest contributions come from families and legal representatives.

Given this, they demanded that all lines of investigation are exhausted, identify to all involvedas well as those who “obstructed justice”, and officials are investigated then. denounced manipulation and impunity and demanded justice.

“We emphasize that the lack of adequate attention, sensitivity, the leaking of information and the reproduction of erroneous information, or even lies by the authorities, perpetuate impunity in this crime,” Patricia Espinosa declared.

At the end of the press conference, they put up posters at the door of the Prosecutor’s Office with phrases that the authorities have expressed and affirm they have criminalized the victims.

For its part, the prosecution responded that there are two people sentenced and one more in process and detailed that opened another line of investigation, in addition to deepening the already existing line in Veracruz.

“We request the intervention of experts from the National Guard: we reviewed more than 60 files and we are processing the information,” he assured through social networks.

In this Prosecutor’s Office we respect the right to demonstrate. We understand and empathize with the demands of the indirect victims: relatives, friends and friends. 7 years after the unfortunate case of multi-homicide in Narvarte, we share the status: 🧵 (1/3)

This Wednesday there will be a meeting with the capital’s attorney general, Ernestina Godoyinformed the relatives, while detailing that they expect an investigation to be initiated with the Prosecutor’s Office for the Investigation of Crimes in the Matter of Trafficking in Persons.

More than two years ago, Godoy promised the families to hold regular meetings. On November 25, 2021, the families formally requested a meeting with the prosecutor.