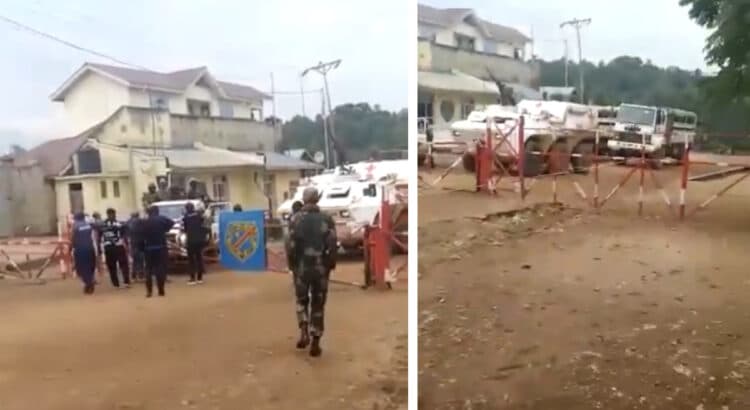 The UN Secretary General, António Guterres, has been “outraged” by the “serious incident” that occurred this Sunday morning in which members of the United Nations Mission in the Democratic Republic of the Congo (MONUSCO) shot dead two people and injured 14 others in the town of Kasindi, on the border with Uganda.

“The Secretary General is both saddened and dismayed by the loss of life and serious injuries sustained during this incident. It expresses its deepest condolences to the affected families, the people of the DRC and the Congolese government, and wishes a speedy recovery to the injured,” the United Nations said in a statement.

Guterres, according to the letter, has underlined the need to establish responsibilities for such actsand has welcomed “with satisfaction” the decision of its special representative in the country, Bintou Keita, to arrest the Monusco personnel involved and to carry out an immediate investigation.

“The UN has established contact with the Democratic Republic of the Congo with a view to urgently initiating legal proceedings with the participation of victims and witnesses so that the corresponding sanctions are issued,” the letter reads.

Francine Muyumba, a senator in the Congolese Senate, released the video of the attack:

The casques bleus of @MONUSCO the United Nations Organization Stabilization Mission in the Democratic Republic of Congo just forced the Kasindi boarder separating #DRC and Uganda shooting on civilians. This organization is no longer protecting civilians as it is now killing them. pic.twitter.com/O4k7KBstBN

Keita, for his part, announced hours before the joint opening of an investigation of what happened with the Congolese authorities, while detailing that the reasons for the incident are “inexplicable”.

“Faced with this unspeakable and irresponsible behavior, The perpetrators of the shooting have been identified and arrested pending the outcome of the investigation, which has already begun in collaboration with the Congolese authorities”, he declared in a statement, adding that the number of arrested soldiers amounts to 67.

During the day this Sunday, at least two people have died and 14 more have been injured by shots by MONUSCO troops against the population in the town of Kasindi, in North Kivu, for reasons still under investigation.

A spokesman for civil society in the city of Beni has reported the balance of victims and has assured that the ‘blue helmets’ prevented demonstrators from entering Congolese territory, according to the RFI radio station.

It should be remembered that since the beginning of last week, the population of eastern DRC has staged several demonstrations to demand the departure of MONUSCO because, according to the participants in the protests, it has failed in its mission to restore peace in the country.

The unrest began on Monday when violent protesters stormed a MONUSCO building in the city of Goma, in North Kivu province. At least 22 people died in the protests, which later spread to several cities in the country.

MONUSCO has been stationed in northeast Congo for more than 20 years, in an attempt to shore up peace in the country despite the presence of some 130 different armed groups vying for control of the DRC’s vast natural resources, which they include copper, cobalt, gold and diamonds, particularly in the extremely violent provinces of North Kivu and Ituri.

Precisely the head of UN peace operations, Jean-Pierre Lacroix, is right now in the country’s capital, Kinshasa, with the intention of smoothing things over with the Congolese authorities, as he did in Mali a week ago.