Ask Seth Meyers a Question That He Might Answer on Video 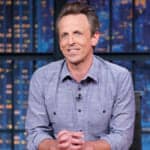 If you’ve ever had a burning question for Seth Meyers, now’s your chance to ask it. The “Late Night” host and “SNL” alum is participating in TheWrap’s new video AMA series, in which Meyers will answer questions submitted by fans on video.

You can submit your questions for Meyers by visiting this page.

Ever wondered what it’s really like to make “Late Night?” Are you curious what Andy Samberg’s response was when Meyers hung up on him during “Corrections?” Do you want to know how Meyers didn’t break down laughing while filming Stefon with Bill Hader on “Saturday Night Live?” Or how about how they choose which documentaries to tackle on “Documentary Now!”?

The choice of question is yours, and we’ll hit Meyers with a bevy of these fan-submitted questions in a video that you’ll be able to watch on TheWrap.