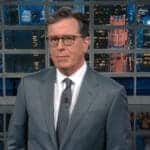 After 25 Republican senators voted last week against the PACT Act, the GOP has constantly been in the headlines for opposing the legislation meant to help veterans who were exposed to toxins in the line of duty, and on Monday’s “The Late Show,” Stephen Colbert had something to say about it.

Colbert opened his monologue Monday night by laying out what happened and addressing the vote switch with a blurred, rude hand gesture.

“Recently, both the House and the Senate overwhelmingly passed a bill called The PACT Act, which would expand healthcare coverage for military veterans who were exposed to toxins and burn pits during their service. That’s something we can all agree on. If we’re going to go to war, we have to take care of the warriors. Except that, due to an administrative issue, the Senate had to revote on the bill and this time, the bill was blocked because 25 Republican Senators flipped their vote,” Colbert said to boos from his audience who were reacting to the vote switch.

“And, like many Americans, I’d like to flip them in return,” Colbert quipped, holding up a middle finger, blurred on CBS.

The host then found a complicated football analogy to try and break down the logic of the vote switch.

“Why would Republicans screw over veterans on a bill they previously voted for? Well, one theory is they had their boxers in a bunch after Joe Manchin and Chuck Schumer secretly negotiated a big climate deal. So screwing veterans might be political payback. Well, that would be some misdirected anger, GOP,” he said. “That’s like the quarterback saying, ‘All right, we’re down 20. I just threw an interception and the other team scored. Here’s the play, I’m gonna go sucker punch that old guy at the hotdog stand. esta bien? ‘Slap grandpa’ on three.”

Colbert then moved on to pointing out how Texas Senator Ted Cruz fist bumped another member of his party after voting down the legislation.

“I imagine there’s some veterans out there who would like to bump Ted Cruz with their fists,” Colbert joked.

As the “Late Show” host wrapped up that topic, Colbert, of course, mentioned his former “Daily Show” boss Jon Stewart, an advocate for the PACT Act. You can watch that part of his monologue around 4:40 in the video above.