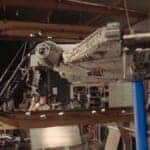 Are you ready to find “Lost Ollie?”

The upcoming Netflix series, which debuts August 24, is based on a story by William Joyce, whose stories have been adapted into “Robots,” “Meet the Robinsons” and “Rise of the Guardians.” It follows a lovable, hopelessly lost toy rabbit named Ollie (voiced by Jonathan Groff) as he searches for his young owner (Kesler Talbot).

His search sees him traversing many dangers in a surprisingly naturalistic deep south, as he teams up with a clown doll named Zozo (Tim Blake Nelson) and a battle-hardened bear (Mary J. Blige). And you can watch the trailer (above).

“Lost Ollie” is directed by Peter Ramsey, who directed “Rise of the Guardians” and was one of the directors behind “Spider-Man: Into the Spider-Verse” and created by animator Shannon Tindle (“Kubo and the Two Strings, “Netflix’s upcoming “Ultraman” animated feature). The animation for “Lost Ollie” is being handled by legendary visual effects house Industrial Light & Magic, and the integration of animated characters with live-action backgrounds really does push the envelope here (as you can see in the trailer).

The limited series was produced by 21 Laps, the producers of “Stranger Things” and consists of four episodes. It co-stars Jake Johnson and Gina Rodriguez. And it is very, very cute.