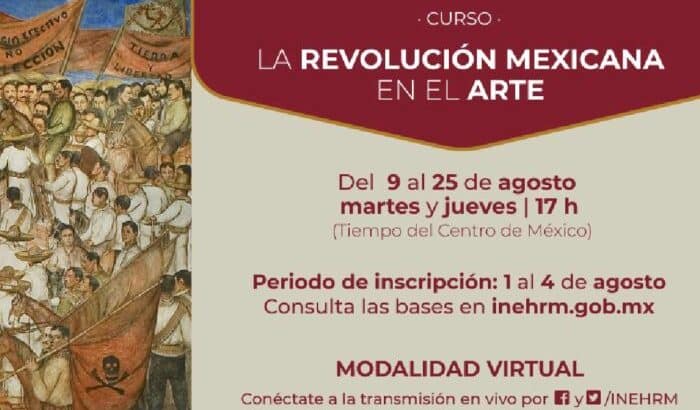 To promote knowledge of national history, the National Institute of Historical Studies of the Revolutions of Mexico (INEHRM), invites the entire public to take the virtual course: “The Mexican Revolution in art”which will take place during the month of August.

The virtual cycle, made up of seven conferences, will be broadcast on the INEHRM social networks Tuesdays and Thursdays from August 9 to 25, 2022, at 5:00 p.m..

The sessions will be taught by eight academics specialized in different artistic and aesthetic disciplines; in Linguistics and Literature, Aurelio Gonzalez, from El Colegio de México; in Cinematography, Eduardo de la Vega Alfaro, from the University of Guadalajara; in historical photography, Rebeca Monroy Nasr, from the Directorate of Historical Studies of the National Institute of Anthropology and History; in Literature, Paco Ignacio Taibo II, director of the Economic Culture Fund; in political cartoon, Rafael Barajas Durán “El Fisgón”; in Art History, Dafne Cruz Porchini; in Aesthetics of Art, Renato Gonzalez Mellofrom the Institute of Aesthetic Research of the National Autonomous University of Mexico, and in History of Muralism, Guillermina Guadarrama Peña, from the National Center for Research and Documentation of Plastic Arts, of the National Institute of Fine Arts and Literature.

The Mexican Revolution has been one of the most interpreted and reinterpreted historical events by artists of different specialties. From engraving, historical photography and photojournalism, public opinion and political caricature, documentary and fiction cinema, the literature of the Revolution, popular corridos, in addition to having a strong aesthetic influence on the arts during much of the 20th century. .

In addition, it was the inaugural process of the Mexican 20th century. The political and social demands of the armed groups were expressed in texts, plans, manifestos, newspaper articles, political and military actions, as well as in legal texts, whose most prominent expression is the Constitution of 1917.

The artists’ argument was summarized much later by the painter Francisco Goitiaregarding the discussion in the National Front of Plastic Arts, on the proposal to create a Secretariat of Fine Arts and Tourism, made in 1952, by President Miguel Alemán: “the Revolution should acculturate the popular classes.”