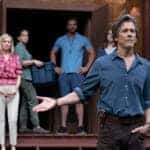 Veteran screenwriter John Logan makes his directorial debut with “They/Them,” a Blumhouse horror movie set in a gay conversion camp, and his formidable screenwriting prowess is what really sets this picture apart from others in the horror genre.

Logan is more interested in psychological horror than in the typical slice-and-dice of slasher movies, and in several scenes here he achieves a remarkable intensity.

Looking at Logan’s distinguished list of credits as a screenwriter – including “Any Given Sunday,” “Gladiator,” “The Aviator” and “Skyfall” – it is not too apparent that he would be the first choice for material like this. But writers should be free to write about whatever they want, of course, and it feels clear in “They/Them” that Logan is smart, informed and insightful about the most complicated contemporary gender issues.

Kevin Bacon excels here as Owen Whistler, the head of a gay conversion therapy camp that has the words “Respect, Renew, Rejoice” on the sign above the entrance. Yet Whistler does not present himself as a religious man. “I can’t make you straight!” he cries, disarmingly, to a group of queer kids who have been dropped off at the camp. “Gay people are A-OK with me!” I have insisted “If you’re happy the way you are, more power to you.”

Logan takes pains in “They/Them” to imagine what a clever and modern head of a camp like this might say to teenagers in order to seem cool and seductive, and the references he uses can be very amusing. Logan shows us young Toby (Austin Crute, “Booksmart”) reading “Kate Remembered,” a memoir about Katharine Hepburn written by A. Scott Berg, and this is just one of many unexpected details here that assure us we are in hip hands. 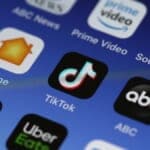 In order to win over Toby, who loves musical theater, Whistler brags that he saw the original production of Stephen Sondheim’s “Merrily We Roll Along” twice, and it’s all too easy to go along with what he says if you don’t listen too carefully. Whistler claims he only wants to lead them to a “gender normative lifestyle that is authentic for you,” and he’s up on buzzwords like “inclusion” and can use them where needed.

There are times in “They/Them” when the genuine pain expressed by the young characters sits somewhat uneasily next to the expected plot points in this type of genre picture – audiences who might be going to this movie for gore are definitely going to feel underserved – but genuine horror is achieved in a scene where Whistler yells at Toby to kill a dog, and in another scene where Whistler’s wife (Carrie Preston) says the meanest possible things to the nonbinary Jordan (Theo Germaine, “Work in Progress”), which carry the deep sting of real evil and are scarier than any knife-wielding killer on the loose. 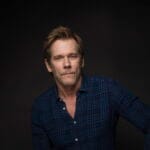 The roleplay scenes where gender roles are enforced feel just as insidious as Whistler’s introductory spiel, especially when he talks about what it is to be a man and how “no amount of liberal humanism can alter that essential truth.” What makes Logan’s writing so effective in “They/Them” is that he gives the villains such persuasive-sounding dialogue, which cannot easily be shrugged off. Bacon really relishes this role that offers him so many of the best lines, and he has a natural authority and magnetism that makes him believable as a kind of cult leader.

Some of the later scenes in “They/Them” aren’t quite as pointed, and a few plot twists aren’t too plausible, but the conclusion carries the sense of hurt and emotion that makes this far more than the usual paint-by -numbers horror show. The premise of “They/Them” makes it sound like it could be either unwieldy or distasteful, but Logan skirts nearly all pitfalls here and delivers a movie that respects its audience and shows what can be done when a talented veteran screenwriter gets a chance to write and direct a genre picture with some teeth to it.

“They/Them” will premiere on Peacock August 5.