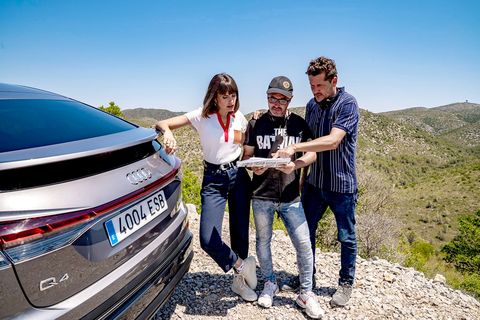 The actress Verónica Echegui is the protagonist of ‘Estepas’, the short film winner of the second edition of the Audi Future Stories contestwhose filming has just finished in Barcelona. The piece will premiere on September 23within the San Sebastian International Film Festival.

Pedro Marchangraduated in Film Directing at the Reus Film School (ECIR) is the creator of the script ‘Estepas’, winner of the second edition of the Audi Future Stories short film script contest, has co-directed the filming of his piece together with the director, producer and screenwriter Kike Maíllo. This intense and exciting thriller tells of the escape of a mother and her daughter in an Audi Q4 Sportback e-tron and the encounter with a stranger who will bring out her most hidden secrets.

Echegui defines her character as follows: “Cristina is a woman who runs away but who, despite what she has suffered, discovers that there are good people willing to help”, and adds: “I loved working with Kike, he is easy, flexible , playful and as an actress I appreciate it very much. Pedro is a charm, intelligent, sensitive… he has been very attentive to our needs as actors, and has also been very flexible, the two make a great tandem”.

The author of the script also describes with emotion what it has meant for him to shoot with the filmmaker and the actress from Madrid: “It has been an extraordinary journey, like the one in history. Being able to see Kike Maíllo work in the first person and learn from his vision and experience as a director on the set, it is priceless. It is an intensive masterclass, another added prize. Like the casting, which has exceeded my expectations, “he explains.

For his part, Maíllo highlights the importance of the initiative of the brand with the four rings and how it has been to co-direct the script and the work of Verónica Echegui: “One more year, I have the feeling that the Audi Future Stories initiative is very worthwhile. Seeing someone with enthusiasm and talent, like Pedro Marchán, carry out a short film with such precision moves me. We left the shoot very happy. I think that the emotional texture of Pedro’s script has been endorsed by the good work and chemistry of the two protagonists: Verónica Echegui and Javier Oliveras. And I have a feeling that all of those elements together are going to take this short thriller genre to a more emotional place than we’re used to.”

In this second edition of the contest, the participants had to present a story that also included the Audi Q4 Sportback e-tron, a model that reflects the capacity for innovation of the brand with the four rings and its vision of the future, betting on sustainable mobility as it is a 100% electric model. Along with Kike Maíllo, the jury was made up of José Luis Rebordinos, Director of the San Sebastián International Film Festival, Jaume Ripoll, co-founder and Editorial and Development Director of Filmin, and José Miguel Aparicio, Director of Audi Spain.

Audi Future Stories, the initiative created to promote the talent of the future promises of Spanish cinema, has been consolidated in this second edition registering a greater participation both in number of schools and studentsreinforcing the bet and commitment of the brand with the four rings with the world of culture.