After testing negative for COVID-19 earlier this week, Joe Biden is positive once more. But on Monday, Jimmy Fallon went ahead and found an optimistic note for the president – ​​at least some part of his administration got a second round.

Biden first tested positive for COVID-19 on July 21, with a statement from the White House saying he was having only “very mild symptoms.” After the diagnosis, Biden began taking Paxlovid and, per the White House’s own protocol, worked in isolation until he tested negative.

That negative test came on July 27, and Biden got back to work in person. Unfortunately, the president tested positive again on July 30, marking what doctors call a “rebound case.” But, like we said, Fallon found some positivity for the circumstances during his monologue on Monday night.

“Right now Biden’s looking on the bright side, he’s like, ‘Well, at least my COVID got a second term,’” Fallon joked.

The “Tonight Show” host added that the rebound case set in so fast, “staffers didn’t even have time to take down the ‘Get Well Soon’ balloons.” But Fallon was also pretty sure he knew why Biden tested negative and then positive again all within a span of a few days.

“They’re saying it’s because of the medicine he took, but I think it might be something else,” Fallon hypothesized. “Watch this commercial I saw the other day.”

At that, a “commercial” played for “Vladimir Putin’s Trick COVID Test.” Complete with a Russian-accented voiceover, the footage promoted a fake test that goes back and forth between positive and negative results, “then monkeypox, then pregnant.”

The tagline for the product? “Used by White House and They Don’t Even Know!”

You can check out Fallon’s full monologue in the video above. 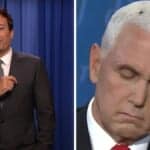