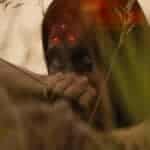 For decades “Predator” has been a black sheep in the monster-movie family. The creature was instantly iconic, but the franchise has always struggled to capitalize on the original classic film. At their best, the “Predator” sequels have been entertaining big-bad-beast yarns but at their worst — which is 60% of the time — they’ve been ill-conceived, shoddily produced and more than a little embarrassing.

Dan Trachtenberg’s “Prey” is the sort of shot in the arm every long-running movie series dreams of. It goes back to basics, reminding us of what made the central concept so captivating in the first place while placing it in a new and exciting framework. “Prey” deserves the ultimate horror sequel compliment: If none of the other films existed, it wouldn’t just stand alone — it’s good enough to spawn a franchise by itself.

Set in 1719, centuries before the previous “Predator” films (with just enough hints to show that at least some of the previous entries are still canon), “Prey” stars Amber Midthunder (“Roswell, New Mexico”) as Naru, a young Comanche woman who dreams of embarking on her rite of passage, her “kühtaamia,” which is not just a hunt; it’s a hunt for a creature that’s also hunting you.

Naru is enthusiastic to a fault. She’s skilled but lacks experience. When a lion drags a boy away from their camp, Naru joins her ella brother Taabe (Dakota Beavers) and the rest of the young men to hunt the lion, rescue the boy and prove herself worthy of her. It is most unfortunate that this just happens to be the day that a very large, technologically advanced alien has decided to visit the northern Great Plains on a hunting expedition of his own.

If you’ve seen a “Predator” movie before, you’ve got at least some sense of where “Prey” is going with this. Our hero will encounter the Predator (Dane DiLiegro, “American Horror Stories”), that Predator will kill a lot of people and creatures, and eventually the humans will use everything they’ve learned about the alien, the art of hunting and themselves to face off against the greatest threat in the galaxy.

Previous films in the series pit the alien menace against a variety of total badasses. Where director Trachtenberg (“10 Cloverfield Lane”) and screenwriter Patrick Aison get clever is in setting their “Predator” movie not in a big city, not in a giant temple, but amidst a culture of hunting. The characters in “Prey” aren’t merely soldiers; they value and honor the hunt just as much as the monster they’re fighting. 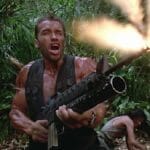 Trachtenberg is also quick to call out his shots. One of the first images in “Prey” evokes the iconic framing of John Wayne through the cabin door in “The Searchers,” demonstrating in no uncertain terms that his particular Western, regardless of its sci-fi trappings, is subverting our collective, very colonialist conceptualizations of the old west. The cinematography by Jeff Cutter (“There’s Someone Inside Your House”) evokes glorious widescreen frontier imagery made famous by one epic Western after another, but the lens never lingers heroically on anyone but Naru, her brother or their mother Sumu (Stefany Mathias, “ Longmire”).

Indeed, “Prey” has no respect whatsoever for anyone who hunts dishonorably. Fields of skinned buffalo, left to rot and waste, are the fault of French trappers who are painted with only slightly less broad a brush than the singing and dancing antagonists of Trey Parker’s “Cannibal! The Musical.” But the movie needs fodder for Predator carnage, and they will very much do.

And oh, what Predator carnage Trachtenberg has for us. The monster lays thick waste to a variety of dangerous animals — all computer-generated, but nevertheless, let the squeamish beware — before turning its high-tech slaughter gizmos onto human beings. The Predator easily massacred heavily armed mercenaries, cops and soldiers in previous installations, but in all those cases, it was only when the human characters stopped relying on fancy weaponry and resorted to the basics that the monsters could be stopped. It makes perfect sense that Naru, her brother de ella and the other members of their hunting party would give the Predator serious trouble (or at least an exciting fight). 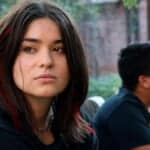 Midthunder stands out in the cast, since at least half the movie is just her alone in the woods, hunting the Predator, being hunted, and hanging out with the bestest-best movie dog, Sarii (who is a very good dog, yes they are). It’s Midthunder who carries the emotional heft of “Prey” and is responsible for conveying staggering amounts of exposure, often without saying a word, and she’s completely up to that challenge. Her performance by her is not just engrossing; it has weight.

The excellent lead performances, grand cinematography and sharp screenplay are matched by a particularly memorable and thrilling score from Sarah Shachner (“The Lazarus Effect”), whose work skillfully adapts, depending on the scene. It’s a classical frontier orchestration, it’s a creepy monster riff, it’s a tender dramatic piece, it’s everything in between.

“Prey” is a glorious monster flick, a sly revisionist Western and a really cool “Predator” sequel for viewers who don’t mind a little fan service here and there. Trachtenberg has directed the hell out of one of the best monster movies in years, proving that there’s life in any horror franchise if you stick to what makes the central creature fascinating. And the Predator is, for the first time in years, genuinely fascinating.