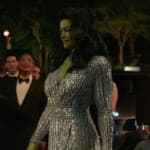 “I feel incredibly deferential to how talented these artists are and how quickly they have to work,” Maslany said during a virtual Disney+ panel at the Television Critics Association summer press tour. “Obviously, much quicker than probably should be given to them in terms of churning these things out. And I know that there’s a lot of eyes on the CG and a lot of critique or whatever, but I do think that we have to be super conscious of how the work conditions aren’t always optimal, and that they’ve made these amazing stride in this industry.”

Coiro added, “We stand in solidarity with what they say. The truth is, we work with them, but we’re not behind the scenes, on these long nights and days and so, if they’re feeling pressure we stand with them and we listen to them.” The director also said that she believes the criticism over She-Hulk’s appearance comes from “our culture’s belief in their ownership of women’s bodies,” which was based on Olympian athletes’ physiques.

Gao echoed these sentiments, saying, “This is just a massive undertaking to have a show of this scale, where the main character is CG, like it’s very overwhelming and ginormous thing to take on and it’s terrible that a lot of artists feel rushed and feel that the workload is too massive. I mean, I think everybody on this panel stands in solidarity with all workers and is very pro good working conditions.”

Maslany chimed in to say that the panelists are “pro-union.”

The studio behind the omnipresent franchise has long faced criticize from VFX artists over long hours, tight deadlines and exhaustion. There has also been steady conversation about the deteriorating quality of special effects, including the climactic battle scene in 2018’s “Black Panther” and recent talk of She-Hulk’s look of her. In a recent scathing vulture piece, an anonymous VFX worker stated he was tired of getting “pixel-f—ed” by the studio.

“She-Hulk: Attorney at Law” follows Hulk’s (Mark Ruffalo) cousin, Jennifer Walters (Maslany), an attorney specializing in superhuman-oriented legal cases who must navigate the complicated life of a single, 30-something who also happens to be a green 6-foot-7-inch superpowered hulk. The nine-episode “meta and self-aware” comedy series also stars Tim Roth as Emil Blonsky/the Abomination, Benedict Wong as Wong, and features a much-anticipated reprisal of Charlie Cox as Daredevil. Josh Segarra, Jameela Jamil, Jon Bass and Renée Elise Goldsberry round out the cast. The series streams on Disney+ beginning Aug. 18. 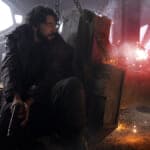