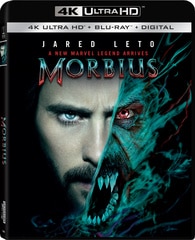 Sharing the same Universe as the recent “Venom” films, “Morbius” (known to Marvel Comics fans as Morbius: The Living Vampire) didn’t exactly light the world on fire commercially when it was released in early 2022. Criticized for its screenplay , performances, visual effects, and everything in between, it managed to eke out a tiny profit, but was nowhere near as successful as properties produced entirely by Marvel Studios. The film is meant to possibly set up a possible Sinister Six films (as evidenced by the awkward mid-credit scenes), but also lead into the world of Blade, with the possible inclusion of Spider-Man at some point. Nevertheless, Sony seems to have gotten off to an unfortunate start, releasing a series of films (Venom and Venom: Let There Be Carnage included) that don’t exactly match the quality of their Disney-owned counterparts. Even so, it’s good to see a franchise expand into different factions, much like the original comics, which went into a myriad of directions with multiple characters from varying storylines and universes. But at this juncture, Morbius is the least-accepted among the Sony-produced Marvel films.

Michael Morbius (Jared Leto) is a brilliant doctor and scientist afflicted with a blood illness that leaves him weak and unable to walk without assistance. He grows up in a hospital environment under the care of Dr. Nicholas (Jared Harris) alongside his friend and surrogate brother Milo (Matt Smith), who is also afflicted with the same disorder. He spends his life searching for a cure, revolutionizing medicine with the invention of synthetic blood, but it’s not enough. He eventually begins conducting secret, illegal experiments with vampire bats, making himself a guinea pig for testing. His experiments on him are a success, but the results transform him into a living vampire, equipped with superhuman abilities and a thirst for blood. Martine (Adria Arjona), a fellow scientist and close friend, discovers what Michael is doing and attempts to help him, but not before someone else steps in and helps themselves to the cure, performing the same feats and killing people in their wake. Hot on the trail are a pair of FBI agents, Rodriguez (Al Madrigal) and Stroud (Tyrese Gibson), and Michael must now focus all of his energies on undoing the effects of the cure while stopping whomever is framing him for murder.

The question at hand: Is “Morbius” as bad as the internet would lead one to believe? Of course not. It’s not the worst thing ever, but it’s not a home run either. It’s mediocre to poor for most of its running time, though it has some interesting ideas. But was this a case of a studio tinkering with their product to the point of nearly killing it prior to its release? Maybe. Judging by the multiple rounds of reshoots before it hit theaters, something certainly seems to have been amiss. It’s also not clear how much Sony knew about the outcome of Spider-Man: No Way Home since Morbius was originally meant to take place in the same universe. As evidenced by the end result, it doesn’t. Spider-Man is only mentioned once and Adrian Toomes’ character apparently had more interaction with Michael Morbius in the film’s first trailer. So was Marvel Studios up front with their Sony partners about the direction that the Spider-Man series would take? You be the judge.

In any case, “Morbius” is a terrible film for many people, so much so that internet trolls have inadvertently given the film a new life as a possible cult item. But whether it will reach the same plateau as the recent Cats film—similarly released, re-released, and adjusted by the studio before being laughed off of movie screens—remains to be seen. I personally found sections of the film to be mildly entertaining and others not so much, but it’s definitely not up to par.

“Morbius” was captured digitally in a variety of formats by cinematographer Oliver Wood (Die Hard 2, Bill & Ted’s Bogus Journey, The Bourne Identity) The film was finished as a native 4K Digital Intermediate at the 2.39:1 aspect ratio (which means it’s a digital film). The Blu Ray release isn’t quite as robust as its 4K Ultra HD counterpart, but it’s still strong. Because the film was shot in such high quality, the same excellent depth is on display. The CGI mostly blends with the live action elements, although a few sequences certainly stood out, including the opening moments of Michael standing outside of a cave filled with bats. Blu Ray detail is lessened in comparison to its 4K counterpart, but it’s still a great high definition presentation of the film.

The main audio option is English 5.1 DTS-HD Master Audio. The Dolby Atmos track included on the 4K Ultra HD release is a knockout and more powerful than this standard DTS-HD option, but it’s still a muscular track in its own right. Dialogue exchanges are clear and precise while the surrounding speakers are given plenty to work with, from quiet ambient moments to LFE-powered explosions and gun fire. Sound effects whiz by all around the sound stage while the score is offered an abundance of aural authority. In short, both soundtracks will give your system a great workout.

My conclusion, MORBIUS may be a good outing for die hard fans only, but for anyone else, it’s a sub-par film that truly has plenty of potential but fails to explore it.