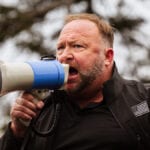 Alex Jones was ordered to pay $4.1 million in compensatory damages to the family of a 6-year-old Sandy Hook shooting victim for repeatedly claiming the 2012 massacre was a hoax, the judge announced Thursday.

The Texas jury set the amount after Jones and his media company, Free Speech Systems, were found liable for defamation of and inflicting emotional distress on families affected by the Sandy Hook massacre.

The Infowars founder had previously offered to pay $120,000 per plaintiff to settle, but the families opted for a jury decision as they sought up to $150 million in damages. There will be a second phase for punitive damages, and Jones faces two additional damages hearings.

Plaintiffs Neil Heslin and Scarlett Lewis, the parents of slain 6-year-old Jesse Lewis, said Jones’ claims made their lives a “living hell.” jones admitted that he now believes the shooting was “100% real.”

Jones’ testimony got especially interesting when the Sandy Hook families’ lawyer told the conspiracy theorist that his legal team had sent a digital copy of Jones’ phone, complete with all the text messages and emails he had sent over the past two years, to the prosecution’s team, presumably in error.

“That is how I know you lied to me when you said you didn’t have text messages about Sandy Hook,” the families’ attorney said Wednesday.

According to rolling stone, the contents of Jones’ phone interested the Jan. 6 Committee as they plan to subpoena Jones’ text messages and emails to aid their investigation of the Capitol riot. The committee previously subpoenaed Jones on Nov. 21 and has been looking into his media support of the Jan. 6 riot and his relationship with Oath Keepers militia leader Stewart Rhodes, who is an alleged conspirator.

Jones was found liable for damages after families from 10 children killed in the school shooting filed four lawsuits against the host and his media company Free Speech Systems, the parent company of Infowars, in Nov. 2021. The families highlight Jones’ role in the harassment and death threats they faced after he spread conspiracy theories that denied the shooting’s existence.