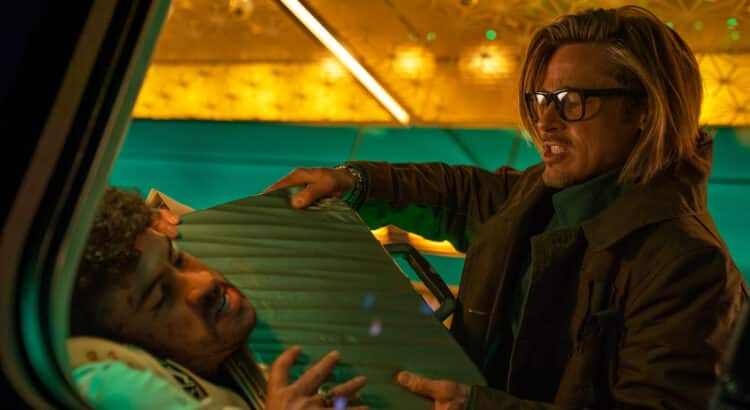 A skilled yet self-deprecating assassin who steps aboard a bullet train from Tokyo to Kyoto with a “welcome back” mission by his trusted handler. While it’s disguised as a simple “retrieve a mysterious briefcase” job, it’s bound to be anything but hunky dory as many other wackjob assassins are in-transit with missions too coincidental to that of our charismatic main guy. The question arises, does the teased end justify the explosive, sugar rush means in David Leitch’s directorial Bullet Train? Let’s find out!

In top billing, we have the unlucky assassin in Brad Pitt as Ladybug, whose handler and right ear aka Maria Beetle (Sandra Bullock) provides a new lease of life to the protagonist. After a few jobs went woefully wrong, Ladybug goes through an existential awakening in parts, spouting wise words you’re used to hearing from your therapist. While he’s seldom easily able to retrieve the briefcase, the luggage in question becomes Bullet Train’s MacGuffin, as it’s stolen from eccentric twins Lemon and Tangerine (Aaron Taylor-Johnson and Brian Tyree Henry impart the “twins” irony), who also have in possession The Son (Logan Lerman in an underused Weekend at Bernie’s schtick!), rebellious child of feared Russian crime lord White Death (Michael Shannon), with an affinity for fingers. 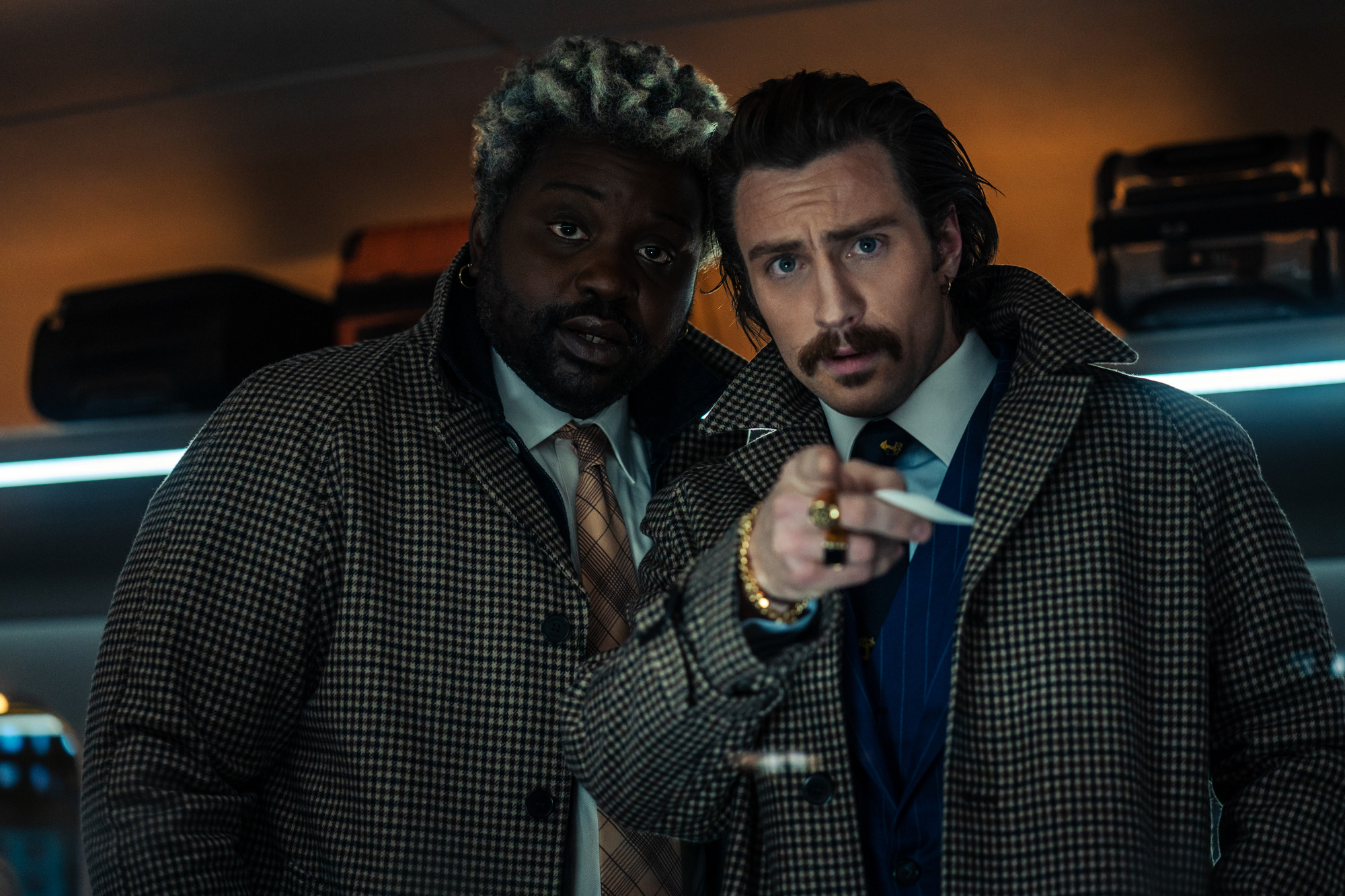 Also on board is The Prince (Joey King) a psychotic, vindictive teen who terrorises The Elder’s (Hiroyuki Sanada) family including his son Yuichi Kimura (Andrew Koji) and his grandson, while rounding up the bunch is The ‘big, bad’ Wolf (Benito A Martínez Ocasio aka Bad Bunny) and Hornet (Zazie Beetz), with their own weapons of mass destruction. His being anger and hers being poison. There’s also a deadly boomslang snake on board the deathly AF train, thankfully with less collateral damage. Based on Kōtarō Isaka’s Maria Beetle, the problem with Bullet Train is the obvious white-washing of the characters, which isn’t justified in tandem with Japan as the setting. To be noted, Bullet Train couldn’t be shot in Japan, given the COVID-19 pandemic. Nevertheless, David Leitch’s hit-making filmmaking tactics when it comes to crisp action sequences which feel as fresh as fresh can get, owing to the overused genre, comes in handy in distracting you from the above conundrum.

See also  Rick and Morty: all of Rick's love interests

Also stopping you from dodging this bullet entirely is Brad Pitt’s retired Deadpool-ish act in Bullet Train as the actor manages to make you laugh, even with the cheesiest, motivational poster lines like “Hurt people hurt people.” Making bucket hat and big glasses look mighty cool like only he can, there’s laidback finesse Pitt adds to the complicated mess surrounding him, where he makes other characters seem more interesting when they eventually encounter him. Subsequently, hilarious in their own might is the bickering duo of Aaron Taylor-Johnson and Brian Tyree Henry as Lemon and Tangerine, as they bounce off of the quirky, unorthodox vibe of the other, even when the latter’s Thomas the Tank Engine quips dry up a little too quickly as does his obvious Guy Ritchie-inspired British accent. 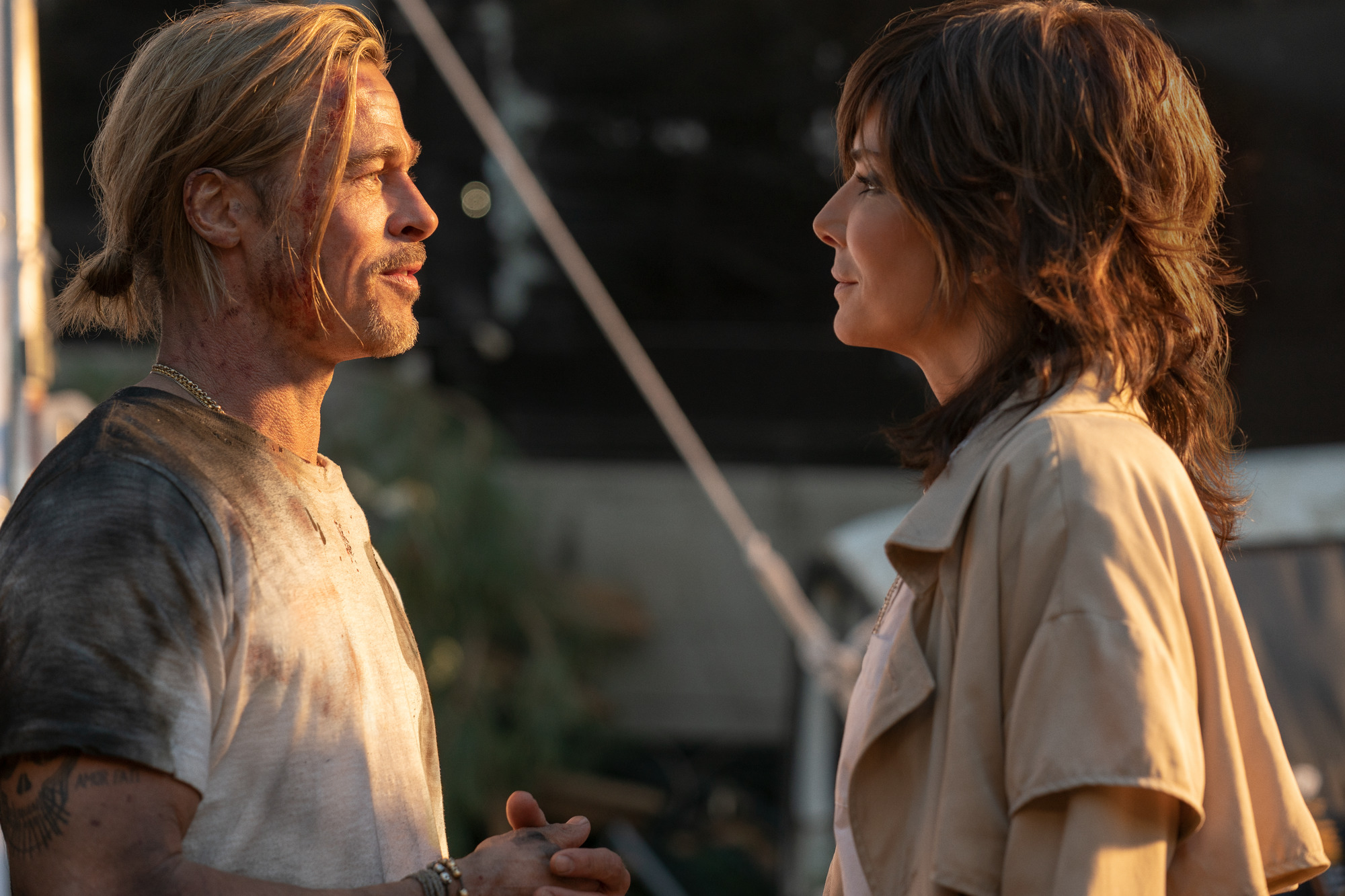 While Bad Bunny leaves an impressionable debut mark with his wild Wolf act in Bullet Train, veteran actor Hiroyuki Sanada breathes the much-needed depth with his entry as The Elder, the only rounded character in the film. A Russian-level misfit amongst these is Joey King as The Prince and Michael Shannon as White Death, who aren’t able to justify their teased unrelenting personalities and turn out to surprisingly be the weak links in Bullet Train. While Sandra Bullock is mostly a voice in motion, her eventual entry of her and her dynamic with Brad Pitt is entertaining times infinity. As are the two big cameos, though too short, which I won’t spoil for you!

David Leitch, whose successful credits include Deadpool 2, Hobbs & Shaw and Atomic Blonde, seems thoroughly inspired by greats like Quentin Tarantino and David Fincher in his (execution!) direction, which flounders in parts. However, what can be credited to him is the thrilling action sequences, in the tightest of compartments. Using the oddest of objects, like a funky Japanese cartoon character and even the briefcase itself, to have two characters really dole it out, it comes as a pleasant surprise that Ladybug doesn’t really use a gun throughout the movie and that’s a testament to how creative and thoroughly enjoyable the action scenes are as a collective. It’s what we wish The Gray Man was, with how expensive the budget bestowed upon the Russo Brothers was. And bringing his over-the-top visuals to life are Jonathan Sela’s “bullet train” cinematography and Elísabet Ronaldsdóttir’s effective editing.

Also, a bonus is the soundtrack choices in Bullet Train by Dominic Lewis like the Japanese version of Stayin’ Alive which cater to the David Leitch brand of freakishly fun cinema. While ineffective at parts, David Scheunemann’s production design when it comes to the bullet train interiors, with each compartment catering to the Japanese aesthetic, is top-notch. Inspite of the technical prowess, it’s the screenplay by Zak Olkewicz that is a major letdown in the grand scheme of things, because you never really get a chance to feel anything for any of the characters. All the bloodshed, and there is a lot of it given how many assassins are in the picture, isn’t impactful as it’s frivolous in nature. If you’re going to watch Bullet Train, don’t wink for a second because you’re more than sure to miss a plot twist in motion, never letting you really breathe it out.

In conclusion, Bullet Train follows the mantra of a blockbuster in motion with its overqualified ensemble, out-of-the-box and taut action sequences and the trademark David Leitch touch. If only it took undue prose advantage of its impressive source material, we would have gotten a righteous winner in our hands. None, a wise, witty Brad Pitt on-screen makes it worthwhile!