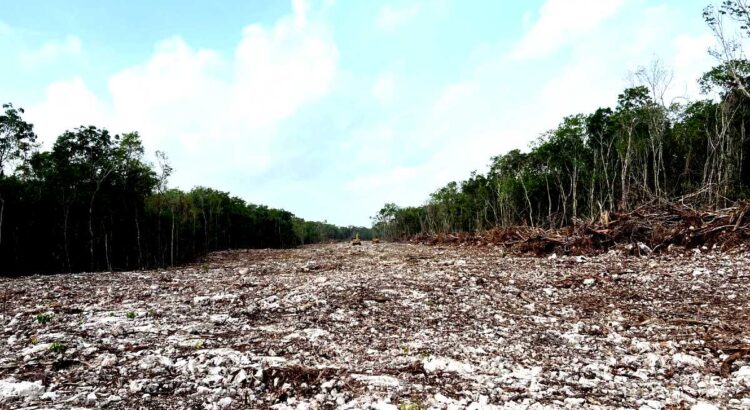 The First District Judge of the State of Yucatan, Adrián Fernando Novelo Pérez, has the obligation to file a complaint with the Office of the Attorney General of the Republic the violation of amparo suspensions granted to various environmental organizations to stop the works of the Mayan Train, warned the Executive Director of the Mexican Center for Environmental Law (CEMDA), Gustavo Alanís

The environmental lawyer added that the complaint for violation of the Amparo Law by the Ministry of the Environment and Natural Resources (Semarnat) and the National Fund for the Promotion of Tourism (Fonatur), hiding behind the declaration that it is a national project, CEMDA plans to file one or more complaints with the FGR for the possible commission of environmental crimes due to the damage caused by the work to the humid jungle of the Mayan zone.

According to Alanís Ortega, the evident devastation of the jungle caused by the works of the Mayan Train and the absence of any procedure to change the use of land in Section 5 of this project, constitute two environmental crimes provided for in article 418 of the Federal Penal Code (CPF), for which CEMDA is ready to present the corresponding complaints. .

According to article 418 of the aforementioned regulation, environmental crimes are committed by those who dismantle or destroy natural vegetation, as well as those who cut, uproot, knock down or fell trees in forest areas such as the Selva Maya, and those who change the use of forest land. without having the corresponding permits.

Article 418 of the CPF states that those who incur in any of these behaviors can be awarded prison sentences ranging from 6 months to 9 years in prison, depending on the severity and devastation they have caused in protected or forest areas.

In addition, the contempt that there is for the suspensions that the judge issued against the works of the Mayan Train, based on this agreement that declares its construction a matter of national security although it is not appropriate and is contempt, there is also the issue of the environmental crimes when there is illegal devastation of natural vegetationwe are in the presence of an environmental crime that has not been reported, he sentenced.

Alanís Ortega added that CEMDA’s lawyers have detected these and other irregularities in order to file the appropriate complaints and amparos against the Mayan Train works at the appropriate time.

Disputed on the three amparo suspensions that were revoked by the First District Judge of the State of Yucatan against the works of the Mayan Trainthe Executive Director of CEMDA said that this is a surprising decision by the imparter of justice, derived from the fact that the federal authorities only complied with two of the three conditions that the judge himself had imposed on the federal government.

He said that contrary to what was indicated by the federal government in the sense that the construction of the Mayan Train can now be resumed, as there are other suspensions of amparo against the works and permits of this projectthe works of this project must continue to stop so that the Fonatur authorities do not continue devastating the Mayan zone.

See also  Teen Titans: Why Deathstroke Is The Real Villain Of The Judas Contract

In this context, he said that those responsible for the amparos have a period of 10 days to challenge the sentence of the federal judge, in addition to the fact that between four and five amparo lawsuits related to the construction of the Mayan Train are still pending resolution.

He stressed that from the legal point of view, theenvironmental organizations can file new challenges against a series of omissions and irregularities that have occurred in the work, such as, for example, the fragmentation of the project into seven different sections so that the integrality of its impact on the environment is not analyzed, the lack of procedures to change the use of forest land and the extemporaneous presentation of the Environmental Impact Statement (MIA).

In this sense, he announced that the Mexican Center for Environmental Law is prepared to take the case before the Plenary Session of the Supreme Court of Justice of the Nation which in the last year has set several precedents in this matter.

“Just as there is no MIA, there is also no change in land use for forest land and one more element is that the work has been evaluated by lines, in sections, fragmented, but the integrality has to be evaluated, that is why it is already giving legal battle to evaluate the work as a whole and in an integral way, instead of doing it for each one of its seven sections”.

Finally, regretted the omission of the Federal Attorney for Environmental Protection (Profepa) to close the works of the Mayan Traindue to the devastation that they have caused and that the construction began when it still did not have environmental authorizations.