Does ‘Bullet Train’ Have a Post-Credits Scene? 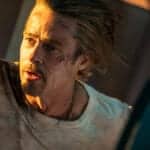 “Bullet Train” is weird and wild and undeniably bloody, taking audiences on a 2-hour journey across Japan. But if you’re here, that probably means you’re wondering what happens at the end of the line. In simpler terms: you want to know if “Bullet Train” has a post-credits scene.

With a film as convoluted and tangled — and well, silly — as “Bullet Train,” it’s hard not to expect some kind of post-credits footage. Especially considering that “Deadpool 2” director David Leitch helmed this movie too; he’s obviously no stranger to post-credit scenes. And that’s a good instinct, because “Bullet Train” does indeed have something to stay for.

Well, sort of. “Bullet Train” does have a stinger at the end, which starts just a few seconds into the credits themselves. It’s not so much a post-credits scene, or even a mid-credits scene, given its placement. But, it starts after the credits start rolling, so it counts. And it gives fans one more laugh before they leave.

In the scene, we’re taken back to a few minutes earlier, when Lemon (Brian Tyree Henry) lunged at one of White Death’s henchman, hurling both men off the train and into water. Now, considering how fast a bullet train moves, it’s easy to assume that both were killed on impact. Fortunately for Lemon, that is not the case. He survives, but so does the henchman he tackled.

Conveniently though, Lemon is able to fish up an automatic weapon from the water, which of course still fires. So, after he takes care of his adversary, he finds his way back to land. As fate would have it, he comes across a tangerine truck (RIP Aaron Taylor-Johnson, you were too good for this assassin-filled world), which he promptly takes over and drives back to the final crash site of the train.

As it turns out, he was the one who mowed The Prince down after she had Ladybug (Brad Pitt), The Father (Andrew Koji) and The Elder (Hiroyuki Sanada) cornered. It’s just a cherry on top that he avenges his brother’s death in a tangerine truck, and he rides off in celebration. It’s an excellent final kill for the film, and something you certainly don’t want to miss.

Beyond that, no, there are no additional post-credit scenes for “Bullet Train.” Like any good assassin, to ties things off cleanly.