How to Watch “Bullet Train”: Is the Brad Pitt Movie Streaming? 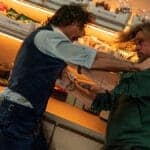 The movie adapts Japanese author Kotaro Isaka’s novel “Maria Beetle.” David Leitch directed the fast-paced film. At the beginning of a month with lesser big titles on the horizon than its previous summer counterparts, “Bullet Train” will kick off the August slate of summer action.

Fans of Brad Pitt, Joey King, Bad Bunny or even Sandra Bullock may be wondering how to watch this thrilling story. We have gathered those details.

When Does “Bullet Train” Premiere?

Will “Bullet Train” Be Streaming?

“Bullet Train” will travel throughout theaters before landing on streaming, but since it’s a Sony film, it is likely that Netflix will be the first streamer to get Brad Pitt’s latest project. Netflix and Sony have a first-window deal in which Netflix will land all of the studio’s films before other streamers.

“What Is “Bullet Train” About?

Ladybug (Brad Pitt), who serves as a for-hire snatch-and-grab man, is asked by his handler (Sandra Bullock) to board a bullet train to Tokyo in order to steal a special briefcase and disembark at the next stop. Of course, many obstacles lie in wait for Pitt’s Ladybug, including a group of highly skilled assassins like The Prince (Joey King), Tangerine (Aaron Taylor-Johnson), Lemon (Brian Tyree Henry), The Wolf (Benito Antonio Martinez Ocasio aka Bad Bunny) and Kimura (Andrew Koji). Other players reveal themselves further into the journey.

Who Is in “Bullet Train”?

Brad Pitt stars as codenamed hitman Ladybug. Sandra Bullock voices her client de ella who guides him onto the train and directs him to take a briefcase that “The Twins” currently have. The Twins is a nickname for the pair of twin men, Lemon (Brian Tyree Henry) and Tangerine (Aaron Taylor-Johnson, who are not actually twins. The pair of sinister men were also, until recently, holding the kidnapped son (Logan Lerman ) of infamous crime boss The White Death (Michael Shannon) hostage. Joey King plays The Prince. Performer Benito Antonio Martinez Ocasio, who also goes by Bad Bunny, appears as Bolivian gangster The Wolf. Andrew Koji also competes in the criminal battle as Kimura , whose son’s life is at stake. Zazie Beetz plays The Hornet. Masi Oka plays The Conductor. Hiroyuki Sanada plays The Elder. “The Boys” star Karen Fukuhara plays the Kayda Izumi Concession Girl. 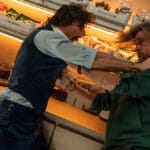