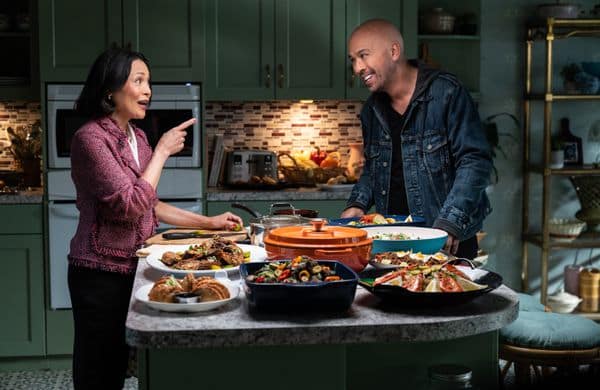 It’s a wonder that the easter sunday filmmakers didn’t see the irony in their premise. Or maybe they did and thought it was super meta. It isn’t.

Filipino-American stand-up comedian Jo Koy plays Joe Valencia, a fictional version of himself. Joe is struggling on all fronts: getting a good role in Hollywood, being a good father and a good son. All of his worlds of him collide when he drives to his hometown Daly City to be with his constantly bickering Filipino family for Easter Sunday, taking his half-Filipino/half-white son Junior (Brandon Wardell) along for the ride.

Koy spends a substantial amount of easter sunday doing a Filipino accent, to lovingly poke fun at his Filipino family. But when his character Joe is required to use an accent for a role he’s auditioning for, Joe immediately refuses.

But here’s the thing. The accent as a bit in stand-up comedy might work, but it is super dated. For example, I didn’t find Canadian comic Russell Peters’ accents shtick funny except when it came to his father’s catchphrase “Somebody gonna get hurt real bad” because of the story around it. Moreover, it doesn’t quite translate to an entire film filled with an assortment of stereotypes.

Sure, there’s merit in the fact that Easter Sunday is based on Koy’s personal experiences, that a largely Filipino cast plays his family, that there’s a smattering of Tagalog in the script and many inside jokes for the community (some of which translate to other immigrants). communities – such as reusing Cool Whip containers for takeaway food). The advance screening that I attended was packed by a largely Filipino audience. And there were a couple of laughs that played into that acknowledgment for the film being Koy’s love letter to a diasporic Filipino community, although I could swear I felt some collective eye-rolling.

There were only a couple of times I truly chuckled with the film. One was during Koy’s banter with Tiffany Haddish, who plays Vanessa, a cop and a former high-school flame, over their past. Another was with Jimmy O. Yang, playing a celebrity goods hustler. Neither of these exchanges centered on Koy’s heritage, although his Filipino identity clearly informed the joke.

easter sunday takes the easy way out. In an interview with Variety, Koy talks about how he tried to pitch a project based on the success of his stand-up comedy, but it wasn’t until Steven Spielberg saw one of his comedy specials in 2019 and got involved that this film got greenlit, so I get the whole issue of gatekeepers and their expectation of a certain narrative. Nevertheless, it’s disappointing that the film takes that well-worn trope of a big family get-together and just lazily adds a Filipino layer to it.

So here, we have two squabbling aunties played by Lydia Gaston and Tia Carrere without any relevant back story. Maybe they could have referenced Carrere’s career de ella, especially as archeology professor Sydney Fox in the Relic Hunter series (1999-2002), just as they poked fun at Lou Diamond Phillips’ career playing Ritchie Valens in La Bamba (1987). Then again, women aren’t central to this narrative.

I’m just wondering if every community needs to make their version of easter sunday before we get to see more complex narratives about immigrant lives. As many problems I have with Master of NoneAziz Ansari and Alan Yang had a much more nuanced take on the business of playing a role with an accent.

In Canada, we are fortunate to have creators like Catherine Hernandez, who wrote Scarborough and then pretty much willed a film adaptation into being. Yes, there are accents, as well as a karaoke song – but all to serve a heartbreakingly beautiful story.

PS Some directors need to stop themselves from making a cameo appearance in their own movie.

In the interest of consistency across all critics’ reviews, The Globe has eliminated its star-rating system in film and theater to align with coverage of music, books, visual arts and dance. Instead, works of excellence will be noted with a critic’s pick designation across all coverage. (Television reviews, typically based on an incomplete season, are exempt.)