Review: Predator prequel Prey is an excellent slice of late-summer nastiness that deserves more than Disney+ 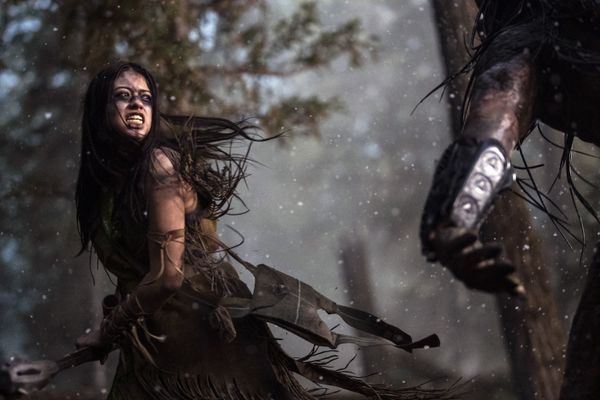 If it bleeds, it leads, goes the old journalism saying – but doesn’t that mean that if it leads, we can kill it? Or am I getting my media and predator cinematic universes confused?

Almost four decades into watching and sometimes reviewing the remarkably resilient sci-fi franchise – which started off in 1987 with John McTiernan’s muscular act of commando vs. alien mayhem – memories can get sloppy and mistakes can get made. Mistakes like Shane Black’s 2018 sequel, simply titled predator, whose story and pacing were as messy as the extraterrestrial’s many onscreen kills. Or the early aught Alien vs. predator films, which impressively ruined two great series in one bloody swoop.

But in a surprise as big and fearsome as the Yautja themselves (somehow, the Predators’ species name never culturally caught on in a Xenomorph-like fashion), director Dan Trachtenberg’s new film Preythe franchise’s latest stab at resuscitation, absolutely kills.

Rewinding the predator timeline back a few hundred years to 1719 – it’s not a big deal, given that the other films treat continuity as bendable as Yautjas treat the human spine – Prey takes place in the Northern Great Plains, pitting the alien against the Comanche Nation. More specifically, the young Naru (Amber Midthunder), who desperately wants to prove herself, especially to fellow warrior Taabe (Dakota Beavers). Such an opportunity arises when a Predator (Dane DiLiegro under thousands of prosthetics) is dropped off on Earth, similarly eager to show his/she/it’s outer-space tribesman that the Yautja has what it takes to hunt with the best of them.

See also  This Is Us Season 6 Episode 11 Review: Saturday In The Park

Trachtenberg, who briefly injected similar life into the moribund cloverfield brand with the clever and small 10 Cloverfield Laneblessedly understands the basic appeal of the predator films: these are violent little thrill rides designed to move fast and efficiently, with maximum carnage and maybe a quick gag or two (of both the humor and throat-reflex variety).

As the Predator begins to pick off Naru’s tribe – and a loutish pack of French fur-trappers, too, for good measure – our untested hero must match wits and weaponry with an impossible enemy. The proceedings are executed with the kind of gorehound-y glee that these films require: the slayings are as inventive as they are plentiful. What’s more: you can actually tell what is going on scene to scene, kill to kill, an unfortunately remarkable thing in contemporary action movies. Holding it all together is a rather wonderful performance from Midthunder, who brings a sort of Aubrey Plaza-esque deadpan charm to a character who could slice your throat without breaking eye contact.

There is a good deal of copy devoted in Prey‘s press kit to the filmmakers’ commitment to accuracy and authenticity when it comes to the Comanche. And details bound in the film itself, thanks to the input of producer Jhane Myers, a member of the Comanche herself. (One large caveat: All the characters speak a rather contemporary form of English, even though audiences have proven time and again that they can handle subtitles.) Yet Prey‘s creative team appear to have spent just as much energy and time studying the hallmarks of classic genre filmmaking, resulting in a spectacle as visceral as its body count is high.

Series-wise, this sits somewhere between the fist-pumping theatrics of the original film and 2010′s under-loved and excellently cast predators (we didn’t deserve Adrien Brody as a Predator hunter then, and we still don’t now). Which makes it all the more disappointing that Prey is skipping theaters entirely for a streaming debut (Hulu in the US, Disney+ with Star here) – the casualty of short-term, pandemic-rushed thinking. Given the relative emptiness of August’s big-screen calendar, Prey is exactly the type of late-summer nastiness that deserves to be enjoyed with fellow hooters and hollerers. But by this point, predator fans are used to playing the victim.