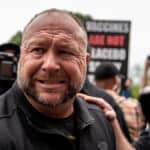 Alex Jones was ordered to pay $45.2 million in punitive damages for repeatedly claiming the 2012 massacre was a hoax, the judge announced Friday, bringing his total liability to the family of a 6-year-old shooting victim to nearly $50 million.

The Infowars host was ordered on Thursday to pay $4.2 million in compensatory damages. The Texas jury set the amount after Jones and his media company, Free Speech Systems, were found liable for defamation of and inflicting emotional distress on families affected by the Sandy Hook massacre.

The Infowars founder had previously offered to pay $120,000 per plaintiff to settle, but the families opted for a jury decision as they sought up to $150 million in damages. Jones faces two additional damages hearings.

Jurors began deliberating on the punitive phase midday Friday, returning their verdict in less than five hours. Jones was already found liable for defamation and intentional infliction of emotional distress against the parents of 6-year-old Jesse Lewis parents, Scarlett Lewis and Neil Heslin.

This story is developing...