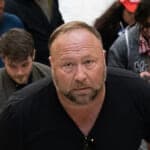 Anne Heche crashed her Mini Cooper into an apartment complex garage Friday, sped away when residences tried to help her and then crashed into a nearby home, setting off a destructive fire that landed the “Six Days, Seven Nights” actress in the hospital with severe burns, TMZ reported.

Photos posted on TMZ show Heche apparently in the moments immediately after the garage mishap, with what appears to be a bottle of alcohol in the cup-holder. The site says apartment residents showed up to help her out of her car but she backed up and sped off, crashing into a home moments later in the West Side neighborhood of Mar Vista.

Other photos show Heche’s damaged and charred vehicle; firefighters battling the burning roof of the house; and a stretcher being loaded into an ambulance. TMZ says Heche, covered in a white cloth, “suddenly sits up on the stretcher and starts flailing wildly as they put her in the ambulance.”

TMZ did not report on the extent of Heche’s injuries, but said she was hospitalized “but expected to live.”

“We really had a multifaceted incident here,” LAFD Capt. Erik Scott told KTLA. “We had a significant traffic collision, we had entrapment of a woman inside that, we had a car that erupted into fire, and then we had a home that had a significant fire that is red tagged. It’s at this point destroyed.”

The Wrap contacted the LAPD and LAFD, which did not have an immediate update. A rep for Heche did not immediately return messages left Friday.

Sharon Knolle contributed to this report.