‘El Jefe’, a jaguar that roamed the mountains of Arizona, was captured in Sonora | Video 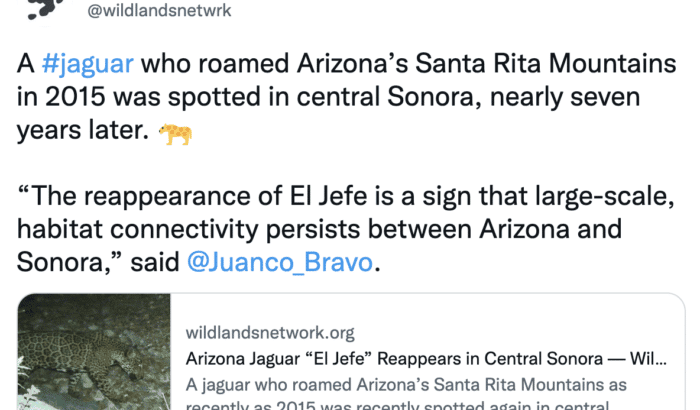 The international conservation organization Wildlands Network confirmed that the adult male jaguar that was first recorded in the mountains of Arizona, United States, between 2011 and 2015, was also identified prowling in Sonora, northern Mexico, in November 2021.

The confirmation that it is the same jaguar, which has been named “El Jefe”, occurred recently, eight months after the sighting of the big cat in Sonora.

Recent photos of ‘El Jefe’, in Sonora, were captured by the non-profit organization Protection of Mexican Fauna (PROFAUNA) at the end of last year, but because more than 150 motion detector cameras are used, to track the solitary American carnivorous panther, The identification in photos of ‘El Jefe’, from November, could not be made until the end of July of this year.

Dr. Carmina Gutiérrez-González, Research Coordinator of the project that follows the jaguar, the Northern Jaguar Project, explained that “when our software showed a 100% match with ‘The Boss’ I was skeptical, but after doing a detailed visual review, skepticism gave way to surprise and then excitement.”

The researcher, principally responsible for the analysis of all the photos of the project, also said: “There is no doubt that this is the same animal photographed in Arizona that many feared dead when he stopped appearing on camera traps almost seven years ago,” said Dr. Gutierrez-Gonzalez.

‘El Jefe’ was at least two years old when he was first photographed in 2011, in the Whetstone Mountains southeast of Tucson, which means that Now he is 12 years old or more, becoming the third oldest male jaguar ever recorded in Sonora.. 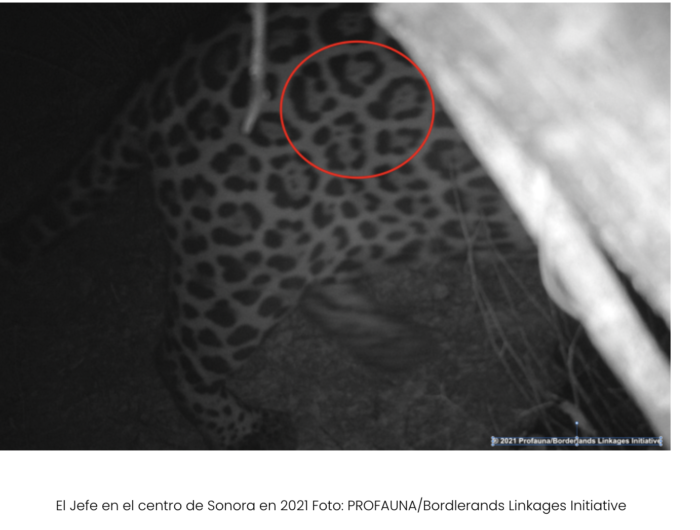 ‘El Jefe’ is one of the few jaguars seen north of the US-Mexico border since the species was extirpated from the southwestern United States more than 50 years ago.

Its follow-up is possible thanks to the Border Ecological Corridors Initiative (Borderlands Linkages Initiative) directed by Wildlands Network. The collaborative initiative brings together eight organizations from Mexico and the United States to protect the northernmost corridors of jaguar habitat through a coordinated approach with ranch owners and wildlife monitoring.

For his part, ecologist Mario Cirett Galán, Coordinator of Priority Ecosystems of PROFAUNA, said that “we are very excited to have obtained an image of ‘El Jefe’”. 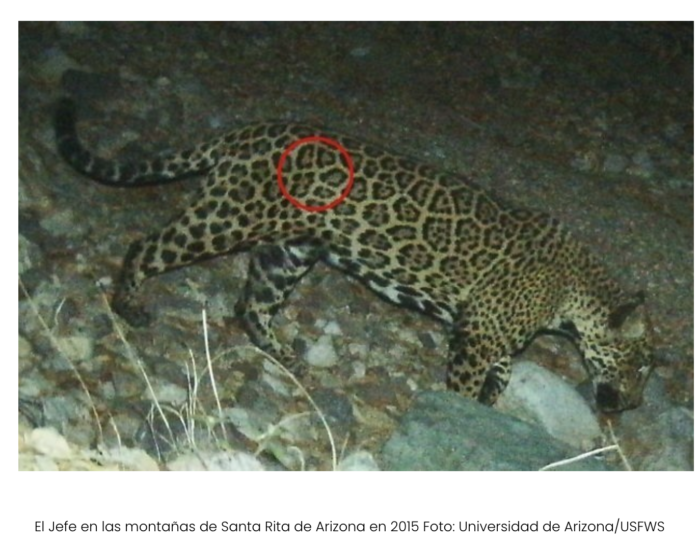 “It is great news that jaguars can survive so long and gives us hope for the many individuals that have stopped showing up in our surveys. The work we have done with the Border Ecological Corridors Initiative and with other partners such as Greater Good Charities, it has allowed us to identify more precise routes used by jaguars in places where few imagined they would be recorded”, he added.

Meanwhile, Juan Carlos Bravo, director of Conservation Programs for the Wildlands Network, reacted by saying that “the reappearance of ‘El Jefe’, more than 120 miles south of where it was last recorded in Arizona, is a sign that large-scale habitat connectivity persists between Arizona and Sonoradespite growing threats from development, mining and the border wall.”

“Our Borderlands Linkages initiative shows that only through international collaboration can we understand and protect powerful species like the jaguar. None of the groups involved could have done this alone, but together we can not only provide proof of the individual feat of ‘El Jefe’, but we can also help secure the habitat that jaguars need, such as the Sierra Azul- El Pinito, a bottleneck for connectivity between our two countries”.

The fact that ‘El Jefe’ has survived so long highlights the importance of strengthening the conservation of the species.