How The Sandman Cast Reinvented Constantine, Lucifer and Death 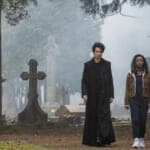 Netflix’s “The Sandman,” based on the Neil Gaiman created comic book series of the same name, loves to remix mythology and that means introducing characters audiences may already be familiar with such as Lucifer Morningstar (Gwendoline Christie), Death (Kirby Howell-Baptise ) and comics character Johanna Constantine (Jenna Coleman).

Lucifer obviously traces its origins back to religion and has been depicted across art for centuries before the advent of Hollywood entertainment. (One of Netflix’s most popular series is, in fact, “Lucifer,” which takes its inspiration from the character’s introduction in “The Sandman” comic). The personification of Death has been a favorite focus of storytellers for eons, with countless shows and movies picking up the mantle over the years. And Johanna Constantine is both a relative and reinterpretation of DC Comics character John Constantine, who has been a popular staple of the superhero universe since his introduction of him in 1985.

So how do these actors attempt to put a fresh spin on such well-worn characters in “The Sandman?” We asked them.

Christie, best known for her role as Ser Brienne of Tarth in “Game of Thrones,” relished the opportunity to collaborate with Gaiman and showrunner Allan Heinberg to add a few new stylish flourishes to the Devil, who is depicted as male in the comics.

“They weren’t going to dictate the terms of what it was,” Christie told TheWrap. “So yes, of course, it can be a crushing awareness that this is an archetypal character and this has been portrayed so many ways and over so many decades. It’s part of our foundation, but I just have to approach it as a role. It’s an opportunity for creativity. Thankfully the writing is so exceptional from Neil, and from Allan with his translation of what this is. They gave me a license to really use my imagination and they empowered me.”

Howell-Baptiste, who may be best known for her roles in “The Good Place” and “Why Women Kill,” found that she had very little work to do in re-imagining the character of Death as it was already well-established in the comics.

“I don’t think there’s anything more familiar than Death. People know it personally and it has been explored throughout literature and art and pop culture,” she told TheWrap. “But something that I think will be a really lovely surprise for people who are just discovering ‘The Sandman’ is that this is a completely different iteration of Death than they’ve ever seen before. This isn’t the Grim Reaper. This isn’t doom and gloom. She isn’t chasing you around your home. This is someone who is offering a hand and saying, ‘I will be your guide in the afterlife.’ She’s a nurturer. She’s motherly. She’s caring.”

For Coleman, who stole the hearts of fans in “Doctor Who” before terrifying audiences with a very different type of character in “The Serpent,” there was a bit of trickery involved in her casting. But it all helped her avoid following in the footsteps of the famous Constantine comics mantle and allow her to carve out her own character from her.

“Allan and Neil actually sent me some material, though without telling what and who it was, which I’m really grateful for in hindsight,” Coleman told TheWrap. “I think I had known it was Constantine, I’d start to research and come up with an idea beforehand. My reaction was very instinctive because it was purely from Allan’s words of her on the page and her psychology of her. I’m glad it happened that way around because it meant I’ve been able to kind of stick true to my instinctive response, as opposed to having too many external influences.”

“The Sandman” is now streaming on Netflix