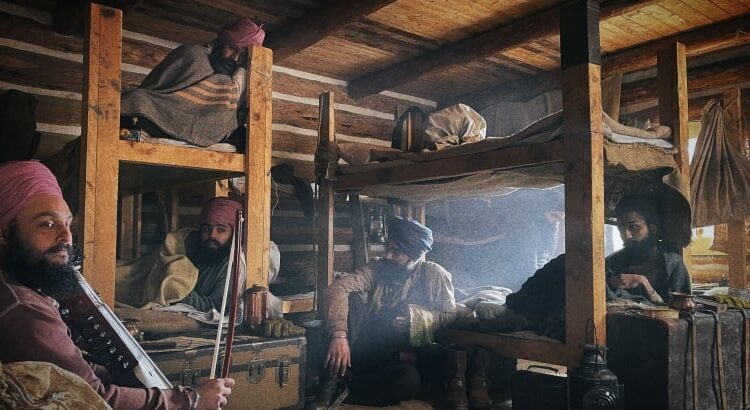 In the early 1900s, a young man traveled to Canada to earn money for his family back home. After joining a small group of fellow Punjabis working in a lumber mill, he is faced with difficult working conditions, harassment, and discrimination.

The movie was filmed largely in the gold rush-era ghost town of Barkerville in BC’s interior, approximately 120 kilometers south of Prince George. It follows the fictional story of a Punjabi immigrant named Chhalla but is inspired by the true stories of Punjabi workers coming to Canada to work in the lumber mills at the beginning of the 20th century.

The movie is produced by Rhythm Boyz Entertainment, a Canadian entertainment company which also operates in India and the United States. It is one of the major players in the burgeoning Punjabi film industry, which caters to Punjabi speakers in India, Pakistan and diaspora communities around the world.

With a budget of more than $1.5 million, the film is one of the most expensive Punjabi movies to date and stars two of the biggest names in the Punjabi entertainment industry, Amrinder Gill and Sargun Mehta. It employed a crew of nearly 200 people in BC and tells the little-known history of the province’s first Sikh immigrants.

Satwinder Bains, the director of the South Asian Studies Institute at the University of the Fraser Valley, says her first reaction to seeing the trailer for the movie was pure joy.

Bains, whose area of ​​research includes migration and racism, says she was pleased to see the movie’s makers had done their research in order to tell the story.

Bains says movies like these have the potential to inspire younger generations to learn their history in a way books or schools are unable to do and should be seen as an “opening” to discuss and learn.

“We need our communities to understand that we have been here over 100 years and that 100 years have been full of experiences — good, bad, indifferent and ugly.”

The movie also touches on the stories of other immigrant communities.

Sydney Eberwein, the Vancouver-based actor starring opposite Gill as the female lead, says her character is based on an Italian immigrant working as a maid trying to earn money to support her family back home.

Talking about the similarities between her and Gill’s characters, Eberwein says their very first interaction in the movie reflects the parallels between BC’s immigrant communities perfectly, and through her character, the film is able to touch briefly on the Italian immigrant experience in BC

The movie grossed $665,000 in its opening weekend of July 29, according to film industry publication Deadline.

It marks the directorial debut for Amrinder Gill, who also stars as the film’s protagonist.

Gill began his career as a Punjabi singer in 1999 with Doordarshan KendraIndia’s public broadcaster and has produced and starred in 22 movies since 2009.

His song Mera Deewanapan topped the Asian music chart in 2014. He has earned the title of best actor for his 2018 movie ashkeand his 2019 movie, Shawl Mera Putt, became the highest-grossing Punjabi film overseas.

The movie is also breaking ground as the first Punjabi-language film to be shown in commercial theaters in Vancouver, in addition to traditional markets such as Surrey and Richmond.

While storylines revolving around diverse characters have previously been seen as niche, Bains says people are realizing that these stories can be told in an entertaining and commercially successful way.

Eberwein says this movie’s warm welcome shows there is a demand for diverse films depicting a myriad of viewpoints.

“This film is setting the stage for the size of production that can be made here for a Punjabi film.”