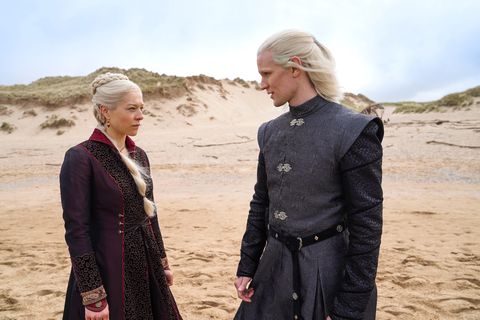 Fans of ‘Game of Thrones’ will soon enjoy the prequel series ‘House of the Dragon’, which follows the story of the Targaryen family.

The show is scheduled to arrive on August 21 on HBO Max and one of its stars, matt smithhas teased that the fantasy drama will follow in the footsteps of its predecessor with many hot sex scenes.

The former ‘Doctor Who’ takes on the role of Viserys Targaryen’s younger brother, Daemonin the next series and has confirmed that his character will have a lot of action in the bedroom.

When talking about the program, Smith recalled being surprised by the number of sex scenes included in the episodes.

“You find yourself wondering, ‘Do we need another sex scene?‘” he told Rolling Stone. “And they say, ‘If we do it’. I guess you have to ask yourself, ‘What are you doing? Are you representing the books, or are you diluting the books to represent time [en el que vivimos]?’ And in fact I think it’s your job to represent the books truthfully and honestly, just as they were written.“.

When asked if Daemon gets a good amount of X-rated scenesSmith laughed: “Yeah, a little too much, if you ask me.”

Smith isn’t the only famous face in ‘House of the Dragon’, as he stars alongside the ‘Peaky Blinder’ Paddy Considine, Emma D’Arcy, Olivia CookeGraham McTavish (“Outlander”), Eve Best and Steve Toussaint.

The story of the prequel series takes place a few 200 years before the main events of ‘Game of Thrones’ and is based on the book ‘Fire and Blood’ by George RR Martin.

The plot will follow the story of a Targaryen civil war known as ‘The dance of the dragons‘.