‘Outlander’, the prequel: official title and everything that is known at the moment 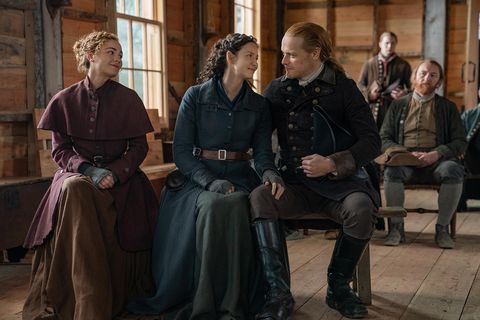 The prequel to ‘Outlander’ is already a reality, and it already has an official title: ‘Outlander: Blood of my blood’. The series becomes a franchise with this new production that is already underway and that aims to expand the stories within the literary universe created by Diana Gabaldon, and that has become one of the best period series on television on the small screen. .

‘Outlander’ became an absolute success from its first season, released in 2014, and almost a decade later continues to arouse the same passion among fans. For this reason, it is not surprising that derivatives of its main story begin to be released, which follows the love story through time and the story between Claire (Caitriona Balfe), a woman from the 20th century who magically travels to the past, and Jamie Fraser (Sam Heughan), an 18th-century Scottish warrior. Honoring its position among the best romantic series, the series revolves around this beautiful romance that survives against all odds, wars, aggressions and whatever.

While we wait for the arrival of the seventh season, which is among the most anticipated series of 2023, Here we compile everything we know about the prequel ‘Outlander: Blood of my blood’: release date, cast, synopsis, images, connections with the original series… It is still early to know most of these details, but we will update this article with all the news that appear.

Starz officially confirmed the ‘Outlander’ prequel in early August 2022, further revealing the official title: ‘Outlander: Blood of my blood’. Months before, in February 2022, Variety told exclusively that talks were already underway for this project, so the team may have been working on the story for a while.

executive producer and ‘Outlander’ showrunner Matthew B. Roberts to write prequel scriptin which he will also act as PE.

Ronald D. Moore, who developed the story for television, will also executive produce along with Maril Davis of Tall Ship Productions and with support from Sony Pictures Television. “‘Outlander’ is a riveting series that, season after season, has captured the hearts of fans around the world”said Kathryn Busby, president of original programming for Starz. “We’re excited to start peeling back the layers of this vibrant world to bring our audience back to where it all began. Matthew, Maril and Ronald will continue to bring their terrific vision and creativity to this new iteration, and we can’t wait to see what happens next.” continuation”.

for now There is no confirmed release date for ‘Outlander: Blood of my blood’and may not see the light of day until 2024.

‘Outlander: Blood of my blood’: what will the series be about?

Although there is still no official synopsis for ‘Outlander: Blood of my blood’ or exact details of its history, we do know what it will be. the center of this new series: the love story of Jamie Fraser’s parents, Ellen MacKenzie and Brian Fraser. After knowing Jamie’s love story, we will travel to the past to verify that the romance that her parents lived was as intense, passionate and dangerous as their own.

Is this prequel also based on Diana Gabaldon’s novels? Yes and no. At the moment there is no published novel that deals with the romance of the Frasers, but it seems that Gabaldon has been working on a prequel novel for some time that could be the basis for the series. Thus, the book and its television adaptation could go hand in hand on this occasion. The writer is executive producer of ‘Outlander’ and she will be again in this new project.

‘Outlander: Blood of my blood’: who will be in the cast?

for now, The cast of ‘Outlander: Blood of my blood’ is a mystery. We will have to wait for Starz to make their official announcements about which actors and actresses will join this new story within the franchise.

We can expect that Caitriona Balfe and Sam Heughan, protagonists of ‘Outlander’, will not be part of the new series for obvious temporary reasons, although it is true that the fantastic possibilities of the story include time travel from the beginning. That’s why, despite everything, we can’t rule anything out!

Who we could find would be young versions of some of the characters we met in the first seasons of the series, when we were still in the wars of independence in Scotland. The entire Fraser clan will have a lot of prominence in the new series, we have no doubt. We will be attentive to all the news to incorporate them here!